'An Intense Climate of Fear Has Been Triggered.' Press Freedom a Rising Concern in 2019, Report Says

Journalists around the world are seeing increased fear and violence in their line of work as media freedom faces further decline, according to data published by Reporters Without Borders (RSF) on Thursday.

The 2019 World Press Freedom Index categorizes the media climate in more than three-fourths of the 180 countries and territories studied as “problematic”, “difficult” or “very serious.” Just 8% have a media climate considered “good”.

The U.S., Venezuela, Brazil, Iran and China saw their rankings drop. Of those five, China — which a separate report by RSF said is ramping up its interference and spread of propaganda not just locally, but in international media — is ranked lowest at 177, while the U.S.’ fall of three spots to 48 is notable as it marks the first time the country’s media climate has been labelled “problematic” in the index. RSF made reference to the attack on Maryland paper Capital Gazette last June, when a man opened fire at the publication’s offices, killing five members of staff.

“This happened in a democracy, not in a country with a reputation of suppressing freedom of thought,” Cédric Alviani, the East-Asia Bureau Director of RSF, told TIME, explaining the shooting as one of the most significant events threatening press freedom in the past 12 months.

Also in the Americas, Venezuela slipped four places to 148. Under the regime of President Nicolas Maduro, news outlets and social media platforms are regularly blocked, and critics arrested. Maduro has also consistently denied the existence of a humanitarian crisis in the country, blocking off the delivery of foreign aid until this week. In February, six U.S. journalists were deported after he said he “did not like” the questions they asked.

“Democracy is in great danger,” RSF secretary-general Christophe Deloire said. “Halting this cycle of fear and intimidation is a matter of the utmost urgency of all people.”

At number 172, Saudi Arabia is the richest country in the bottom 10 of the list, falling three places from last year. In October 2018, Washington Post columnist and longtime critic of the regime, Jamal Khashoggi, was killed in the Saudi Arabia embassy in Istanbul, igniting global concern over further deteriorating press freedom in the conservative country.

“Political leaders consistently denigrate and insult the work of journalists, assuming that media is just pushing an agenda whenever they hear something they don’t like,” Alviani said.

Read more: The Guardians and the War on Truth

The Trump administration has frequently denounced what it calls the “fake news media.” In Brazil, which slipped three places in this year’s index, President Jair Bolsonaro has likewise blasted unflattering stories as misinformation.

Many governments go further than denunciations. The editor of Philippines news outlet Rappler, Maria Ressa, was arrested at the end of March. Her organization is known for its open criticism of President Rodrigo Duterte, whose extrajudicial war on drugs has raised pressing human rights concerns. The Philippines is 133 on the index, below Afghanistan and Nicaragua.

In Myanmar, which slipped a place in this year’s index, two Reuters journalists, Wa Lone and Kyaw Soe Oo, were arrested after reporting on a military crackdown on the Rohingya Muslim minority group.

On the flip side, Ethiopia has climbed 40 places from near the bottom to 110, reflecting the country’s release of all of its jailed prisoners and the dismissal of charges against diaspora-based media outlets under new Prime Minister Abiy Ahmed, who came into office last April. Gambia also moved up in rank to 92, putting it 30 spots higher than last year. RSF attributes the jump to a change in government, under which the human rights climate in the country has greatly improved.

At the top of the rankings is Norway, which has commanded the position for the third consecutive year. Finland and Sweden were second and third place respectively.

Generally, though, the situation does not look hopeful to Alviani. “It’s worse every year,” he said. “Democracies seem to be giving up, while increasingly authoritarian governments are silencing the media.”

According to another report published by RSF, 80 journalists were killed worldwide in 2018, up from 65 in 2017. Forty-nine of these were journalists deliberately killed because of their reporting. A total of 348 journalists were detained.

The Capital Gazette staff, Khasshogi, Wa Lone, Kyaw Soe Oo, Ressa, alongside other arrested or targeted journalists, were collectively hailed as “The Guardians” and named 2018 Person of the Year by TIME in recognition of their work. 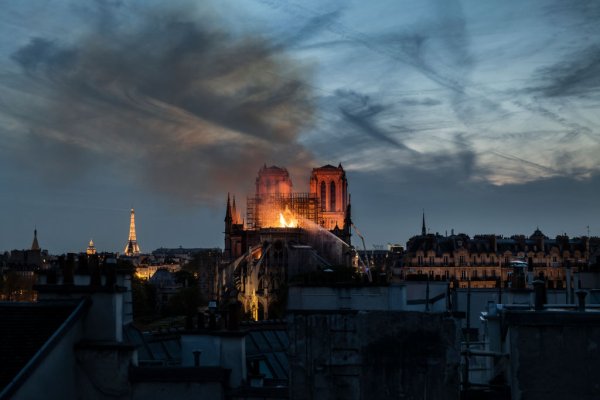 Notre Dame Isn't the First Historic Building to Be Rebuilt After Burning Down. Here Are 6 Others
Next Up: Editor's Pick