It was a big week for Jon Snow and Daenerys Targaryen on the season eight premiere episode of Game of Thrones: one discovered his true identity and the other was introduced to Winterfell, Sansa Stark and the people of the North. And they both were clearly in love, even taking a flirtatious dragon ride to a waterfall in the snowy wilderness.

But Dany might want to watch out for cozy caves and water features as she continues her tryst with the non-bastard Snow. As it turns out, Jon is no stranger to romantic moments in the wild with the women who have won his affections — and it hasn’t always turned out for the best.

Remember Ygritte, his brave wildling partner from previous seasons? (Played by Rose Leslie in the show, she and actor Kit Harington are now even married in real life, too.) They consummate their relationship in a cave scene back in season three. As Twitter has pointed out, there’s some choice dialogue used back then: “I don’t ever want to leave this cave, Jon Snow,” Ygritte says. “Not ever.”

Curiously, it’s a line that Dany comes very close to repeating during their season eight premiere adventure as well. “We could stay a thousand years. No one would find us,” she tells Jon, as the dragons watch them embrace.

Unfortunately, Ygritte and Jon should have stayed in the cave if they wanted to both survive together as she even pointed out; Ygritte was tragically killed in the fourth season by Olly, dying in Jon’s arms as she repeated her own lines from the cave scene once more. 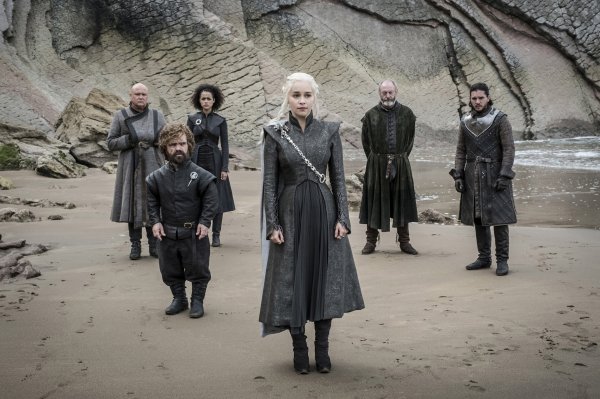 Why the 'Game of Thrones' Show Is Better Than the Books
Next Up: Editor's Pick