Dear Game of Thrones, Enough With the Catfights

Game of Thrones has come under fire before for its portrayal of women, from a rape scene shot to emphasize the suffering of a male victim to hackneyed plots that turn otherwise strong female characters into damsels in distress. This may have something to do with the male-heavy writers’ room: There are four men on Game of Thrones’ writing staff, though three women have received writing credits on a handful of episodes over the show’s eight seasons; women were shut out of both writing and directing jobs for every episode in season 8. But it’s also in keeping with the traditions of the fantasy genre, in which stories lean on the idea that women have to suffer in order to become powerful. On Game of Thrones, just about every powerful woman left on the show has been sexually abused or humiliated in some way.

In recent years, though, the show has made moves to improve its depictions of women. As we entered season 8, Sansa and Daenerys, two of the characters who have suffered the most on the show, were poised to finally meet. Each had grown from a pawn used by the men around them to powerful leaders and political players in their own right. But while their respective suffering may be over, subtle sexism still found its way into the script. The first episode of the eighth season played into one of the most tiresome and toxic tropes in Hollywood, politics, media and beyond: The catfight.

Whether it’s two British duchesses, two female politicians, or two hip-hop icons, the media loves to pit powerful women against one another. This trope can be dangerous. As actor Jessica Chastain recently wrote in a Facebook post, this narrative—in film or in real life—keeps women down by implying there are only a limited number of spots for women at the table, so they must fight one another for power.

We’ve seen this sort of mean girl behavior on Thrones before: In season 7, Sansa and Arya expressed suspicion toward one another for rather flimsy reasons. In reality, the sisters were pretending to be manipulated by Littlefinger in order to eventually turn on him. But the plot twist relied heavily on the assumption that the audience would accept that two long-separated sisters would be more interested in jockeying to one-up each other rather than having an honest conversation. Fans complained that the trumped-up infighting was unrealistic and tiresome.

The sisters spent most of the season fighting about things in private that didn’t make a ton of sense: The two have always squabbled over what it means to be a powerful woman, but never over which one of them ought to have more power. Littlefinger wasn’t in the room during these fights, so it’s unclear whether they were genuine or a put-on—Bran actor Isaac Hampstead Wright has suggested the former, which just seems out of character for the two women, who are portrayed as smart and thoughtful. Sophie Turner, who plays Sansa, even had to continue to defend the plotline on Twitter during the season 8 premiere on Sunday.

But this season, it looks like the writers are setting Sansa up for a genuine fight with Jon’s girlfriend, queen and aunt, Daenerys Targaryen. The women only spent a few brief moments together, and it remains to be seen how the season will progress. But their exchanges in the throne room, with Jon literally sitting between them, were charged.

Sansa has legitimate reasons to be suspicious of Daenerys. Starks who travel South from Winterfell to meet with Targaryens usually end up dead. And though Jon promised not to bend the knee to the Mother of Dragons, he returns to Winterfell as Daenerys’ subject. Sansa suspects that Jon is thinking with his heart rather than his head, even though Jon repeats over and over again that petty squabbles between humans do not matter as the Army of the Dead approaches. He’s clearly only concerned with survival, not politics.

All of that is fine. But Sansa is a politician, not a school girl. When Daenerys enters Winterfell, the two exchange side-eye looks and one-liners like this one:

Sansa: “What do dragons eat?”

Daenerys: “Whatever they want.”

The audience seemed primed to add fuel to the fire on Twitter.

Could two women who have conquered their respective peoples be this petty? Dave Hill, who wrote the premiere episode, gave this explanation of the Daenerys-Sansa meeting to Entertainment Weekly:

This reads like the classic conception of women fighting with one another. To Game of Thrones‘ credit, they’ve established both Daenerys and Sansa as powerful politicians — ones who presumably would dedicate their mind in these apocalyptic times to matters other than the other’s looks.

Once, these women had to function within the confines of a patriarchal system where their beauty was a commodity, and occasionally a curse. But by now, both of them have evolved beyond caring what men think — or trying to function at all within a patriarchal system. Sansa has grown from a girl who dreamed of being swept off her feet by a prince to a woman who commands a man’s own dogs to eat said prince alive as vengeance. For her part, Daenerys has evolved from a woman who was sold into a marriage by her brother into one who set a group of powerful kings who tried to enslave her on fire. Right now, these two women and Cersei rule all the lands in Westeros. The patriarchy has, in theory, begun to become a matriarchy. A show of strength matters far more than how any woman looks.

And yet in the very limited time each talks to or about the other in the episode, both make comments on the other’s beauty. Daenerys tells Sansa when she meets her that she’s as beautiful as Jon described. Later, when Jon tells Sansa in private that Daenerys is “not her father,” Sansa retorts, “No, she’s much prettier.” Such lines feel like something conjured for the show seven long years ago when Sansa and Daenerys were functioning in an entirely different system where Jon or any other man’s approval mattered.

Sansa and Daenerys do have legitimate issues with each other. But it would be easy enough to build tension between Sansa and Daenerys without the undertones of jealousy. I don’t think this explanation would have been given to describe why Jon might be suspicious of Jaime when he enters Winterfell, nor do I think the show would play up rivalries between men like they were scenes from Mean Girls.

It’s exhausting to spend so much time on girl-on-girl rivalries when the Army of the Dead is baring down on Winterfell. And many fans took to Twitter to complain.

A lot has happened since Game of Thrones was last on the air. The show aired the final episode of its seventh season in August of 2017. A few short months later, in October, accusations of sexual assault against Harvey Weinstein surfaced, and #MeToo went viral. It’s hard to imagine fans tolerating the depictions of rape from the show’s earlier seasons in the post-#MeToo era. Discussions springing from that moment have also forced us to consider how women can support one another with hashtags, support groups or even lawsuits, when faced with discrimination and abuse.

Maybe Sansa and Daenerys really would fall prey to their pettiest instincts and make these comments about each other in some version of the show’s universe. But I’d like to believe our society has evolved beyond that version of the show. Game of Thrones has improved its characterizations of women. But in the year 2019, it still has a ways to go. 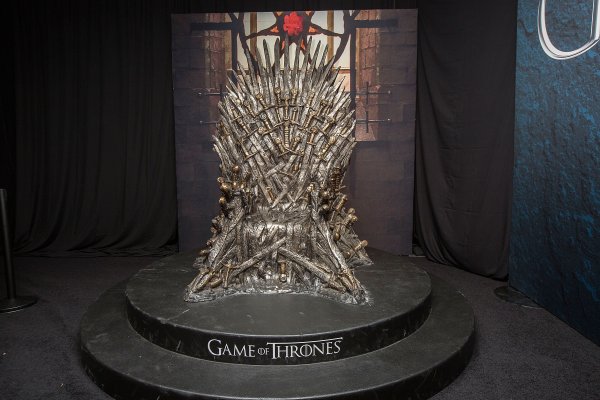 Chinese Censors Cut 6 Minutes From Game of Thrones Premiere
Next Up: Editor's Pick