Trump Is Again Considering Dramatic Action on Immigration. Here's Why

Several months ago, President Donald Trump shut down the federal government in a bid to get Congress to approve a border wall, then declared an emergency when he didn’t get funding. Now, there are signs that he is again considering taking dramatic steps to force the immigration issue.

In recent days, Trump has floated everything from closing the border with Mexico to getting rid of immigration judges to reportedly advising border agents to defy the law and simply deny asylum seekers their legal rights.

On Sunday, he fired Homeland Security Secretary Kirstjen Nielsen, who defended his controversial family separation policy but also at times clashed with him when she argued his other ideas on immigration were not within the law. Other Homeland Security officials may also be fired soon, according to reports.

Experts say there are several reasons for Trump’s dramatic actions. The president has not been able to get Congress to act on his signature campaign issues of building a border wall and making immigration laws more restrictive.

That may be particularly frustrating to someone without a traditional background in politics, said Heath Brown, associate professor of public policy at John Jay College of Criminal Justice and author of “Immigrants and Electoral Politics.”

“The president — after decades in the private sector — is still coming to understand the job that he does and that there are great controls placed around that office,” he told TIME. “Having failed repeatedly in the courts, having failed repeatedly to get Congress to go along with the things he would like, I think he is seeking out ways to get appointees in place that will at least tell him he’s right.”

Trump also hasn’t been able to reduce the flow of migrants to the border, which is driven more by poor conditions in the Central American countries of El Salvador, Guatemala and Honduras than U.S. policy.

As the weather warms, more residents of those countries may make the journey north to seek asylum, especially in the caravans that Trump repeatedly criticized last year. Meantime, seasonal demand in jobs like farming will draw others who are looking to cross the border illegally to work.

Those factors, plus the steadily increasing attention given to the large field of Democratic presidential contenders, likely mean that Trump will ramp up his efforts to focus attention on immigration, experts say.

Trump experienced several setbacks on his immigration agenda in the last year. After an intense backlash over separating migrant families, the President stopped the policy last summer. When he said in November that he wanted to stop allowing people to seek asylum if they did not arrive at official ports of entry, a federal judge blocked this policy. And after shutting down the government in December over funding for his border wall, Trump was empty-handed when he re-opened the government 35 days later.

In response to these incidents, Trump in February declared a national emergency on the U.S.-Mexico border to go around lawmakers and access the funding that Congress would not give him. But experts and data from his own Administration have shown that illegal border crossings are nowhere near record levels, and Trump appeared to undercut his action when he said “I didn’t need to do this” while announcing the move.

One area where Trump’s policies have appeared to make a significant difference is in lengthening the wait times for immigration cases and those seeking asylum.

The Trump Administration has used a more strict system called “metering” to limit the number of people processed for asylum each day. While migrants wait for their hearings, the Administration has also required some of them to stay on the Mexican side of the border, and many have been there for months. (A federal judge blocked this policy on Monday night in a ruling that will go into effect on Friday.) The Trump Administration’s handling of immigration cases has also caused a 26% increase in backlogged immigration cases since October 2017, according to the Los Angeles Times.

In recent days, Trump has doubled down on these ideas as he threatened to close the U.S. border entirely, and then floated some new policy ideas while traveling to visit the southern border in Calexico, Calif. Before his trip, the President said the asylum system doesn’t work and suggested Congress should eliminate immigration judges, and then on his trip, he said lawmakers should “get rid of the whole asylum system.”

“It’s hard to tell with this president what’s real and what’s just some type of negotiation,” Brown said. “What seems like is the case is that they want to change asylum policy. They want to change that because of some belief that those seeking asylum do not belong in the United States.”

Trump has also made other comments recently indicating that he would like to increase the intensity of his administration’s border policy. The Associated Press reported last week that Trump was considering naming an “immigration czar” to head up border policy, and before the final clash with Nielsen, Trump told reporters on Friday that he changed his mind on his nominee to run Immigration and Customs Enforcement because he wanted to go in a “tougher direction.”

These moves may or may not end up happening, but that may not be the point, Brown said.

He pointed to the fact that Trump has already gotten an increasing number of Republicans to favor his wall along the U.S.-Mexico border. In January, Pew Research Center found that 82% of Republicans or those who leaned Republican favored a border wall, up from just 63% in 2016.

“There are reasons to believe that the President is going to make an ever more dramatic case of what’s happening at the border,” Brown said. “Allowing those lines to grow ever longer for people to legally enter the country … I think those are visuals that the president would like to campaign on.” 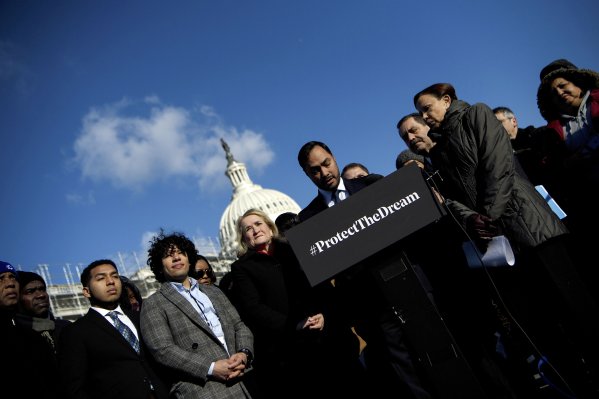 Deportation Looms for Liberians After Decades of Protected Status in the U.S.
Next Up: Editor's Pick