What to Know About Zuzana Caputova, Slovakia's First Female President

Despite having almost no political experience, the 45-year old lawyer and anti-corruption campaigner won 58.4 percent of the vote in the second-round vote, defeating the European Commission Vice President Maros Sefcovic. The political newcomer soared to popularity in just a few months with a campaign that focused on a struggle for justice.

The president is mostly a ceremonial role in the country of 5.4 million, as Prime Minister Peter Pellegrini is responsible for overseeing the government. But when Caputova takes office in June, she will have important blocking powers, will be the commander-in-chief of the armed forces and will have power to appoint top judges.

Where does Caputova come from?

Caputova was born to a working-class family in the town of Pezinok in what was then central Czechoslovakia. The divorced mother of two daughters rose to prominence and was nicknamed the “Erin Brockovich” of Slovakia after leading a successful case against a toxic landfill that was planned in her hometown in 2016. Her 14-year-long case against the wealthy land developer involved organizing protests, filing lawsuits and writing petitions to the European Union. The campaign earned her a prestigious Goldman Environmental prize in 2016.

She recently became vice-chair of Progressive Slovakia, a party so new that it has not yet run in the parliamentary elections.

How did she win the election?

Caputova built her campaign on a vow to fight corruption, by stripping the police and prosecutors of their political influence. Last year’s murder of the investigative journalist Jan Kuciak and his fiancee Martina Kusnirova has put the issue of political corruption at the forefront of public discussion. And Caputova said Kuciak’s murder was the reason she decided to run for president.

Kuciak, who had worked to expose corruption among the political elite was shot and killed in February 2018. Five people were charged with the murder, including a millionaire with alleged links to the center-left political party, Smer. Kuciak’s death sparked anti-government protests attracting tens of thousands of people, which eventually forced Prime Minister and Smer leader Robert Fico to step down. The party is still the largest in the national parliament, however, and Pellegrini is its prime minister.

Caputova’s liberal values also appealed to younger voters in a country where same-sex marriage is not yet legal. Caputova is in favour of same-sex unions and has said that LGBT adoption is better than leaving children in orphanages. On the question of abortion, she said she believes it is a woman’s right to make that decision.

What about her appealed to Slovakian voters?

Her approach to politics, judging by the responses of Slovakians TIME spoke to. “She seemed like someone Slovakia needed – kind, honest and never criticized her opponents,” said Antonia Halko, a 28-year-old wholesale manager from the town of Bardejov in Slovakia who voted for Caputova.

“I saw her talk in person at an event on January 30th and I knew immediately I was going to vote for her. She was very authentic, humane and I simply trusted what she was saying – which is a pretty rare feature in the Slovak politics,” said Juraj Scott, a charity-worker from Slovakia’s capital city, Bratislava.

Corruption among officials was also a core concern. “We all started to realize that we needed to stand up to the corrupt government because our country wasn’t safe. Caputova promised that nothing like this would ever happen again,” Halko said.

What does her victory mean for European politics?

Caputova’s election is a rare progressive victory in central Europe where nationalist rhetoric has grown over the past few years. In neighboring Hungary, Poland and Austria, governments are dominated by right-wing, nationalist parties. In these countries and elsewhere, liberal parties have struggled to counter populist leaders like Hungary’s Viktor Orban whose campaigns focus on migration and social issues.

But Slovakia’s election provides evidence that dissatisfaction with the status quo can usher in more progressive leaders. “I am happy not just for the result, but mainly that it is possible not to succumb to populism, to tell the truth, to raise interest without aggressive vocabulary,” Caputova told a crowd of supporters in Bratislava.

Caputova’s victory, which came on a low turnout of 40 percent, is likely to be only the beginning of the fight for the progressive left in Slovakia. The European Parliament’s elections in May and the parliamentary elections next year will be the real test of the movement’s strength.

The original version of this story misstated the former location of Pezinok. It was in central Czechoslovakia, not the western part. It also misstated the name of Slovakia’s former Prime Minister. It is Robert Fico, not Robert Smico. The story also misstated the number of people charged in the murder of a Slovak journalist. It was five, not three. 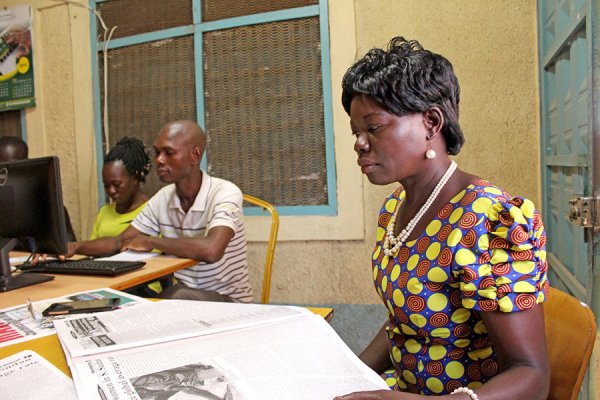 Read About 10 Journalists Now Facing the 'Most Urgent' Threats to Press Freedom Around the World
Next Up: Editor's Pick