As Washington waited with bated breath for the results of Special Counsel Robert Mueller’s investigation, a group of Iowa voters tried to figure out what they thought of it all. Some were Republicans, some were Democrats and some were in between. But as they discussed the probe into Russian meddling in the 2016 election, they came to a surprising consensus.

The Iowans were participants in a series of focus groups convened by researchers trying to understand how the American public will process the results of the Mueller investigation. On March 19 — three days before Mueller filed his report, and five days before Attorney General William Barr released a brief summary of it — the Democratic polling firm GBAO Strategies convened three hour-long sessions in Des Moines, on behalf of a Democrat-backed advocacy group called Protect the Investigation.

Now that the Russia probe has concluded, their findings give a fascinating window into the political implications.

The researchers sought to study people who aren’t the rock-solid base of either party: One six-person panel was made up of college-educated Republicans, one of college-educated independents, and one of Democrats without college degrees. The Republicans and Democrats were “soft” partisans, meaning they scored relatively low on an assessment of their level of party loyalty. TIME was allowed to view the focus groups on the condition that the subjects would not be identified by name.

There were obvious differences between the three groups: the Democrats were generally less charitable toward Trump, the independents were more ambivalent, and the Republicans were apt to defend the President.

But the similarities were striking. The groups shared a sense that the investigation was merited, not a hoax or fabrication. They agreed that the matters being investigated were potentially serious. All three groups thought it was important that justice be done, and were troubled by the idea that politicians and the privileged might get away with things regular people wouldn’t.

Read More: Here Are All of the Indictments, Guilty Pleas and Convictions From the Mueller Probe

The participants in all three groups had an expectation that turned out to be broadly accurate: most of them predicted that the investigation would not directly implicate the President, but would find wrongdoing in his orbit. Presented with several different ways the investigation could end, not a single person in any of the three groups predicted that the investigation would not implicate Trump or his associates in anything. Most people in all three groups picked the option that said Trump wouldn’t be implicated, but people close to him would be. With the investigation having produced indictments, convictions or guilty pleas against three companies and 34 people, including Trump’s personal lawyer and his former campaign chairman — but not Trump himself — that expectation proved about right.

Nobody expected the report to be a major game-changer. “There may be a lot of pistols, but there probably isn’t going to be a smoking gun,” a 69-year-old man in the independents’ group said. And few said the report was likely to alter their opinion of the President. That finding is echoed by national polls of all voters: in a Fox News poll conducted March 17-20, for example, 70% said there was no chance or only a small chance the report would change their views. That poll also found that 52% approved of the investigation, 80% wanted the report made public and 52% believed Trump tried to interfere with the investigation.

In the focus groups, many voiced cynicism about politics and politicians, and wondered if Trump was really all that different. “It’d be nice if he’d be a bit more honest and straightforward,” a 30-year-old woman in the Republican group said, “but with politics, there’s really no such thing as honesty.” A 49-year-old woman in the independent group said, “Reagan had Iran-Contra, where a lot of people lied, even though he was a true statesman in every way.” She added, “We knew what we were getting when he was voted in, so it’s disappointing and discouraging for the state of the country, but we can’t really be surprised.”

Many of the allegations against Trump didn’t strike the focus-group participants as a big deal. “Personally, I don’t care whether he paid some prostitute. Did he write the check? Who cares?” the 69-year-old independent man said. “He’s had a very interesting business life to get where he’s at, and it might not have all been by the books, but it’s only coming to light because he’s president,” said a 35-year-old Republican man. “Him wanting to build a Trump Tower [in Moscow], I don’t understand why that would be so concerning. He has buildings, he has money, he does stuff like that,” a 29-year-old woman in the Democratic group said.

The prevailing view in all the groups was that Trump had likely found a way to keep his hands clean, even if he was behind whatever wrongdoing had occurred. “I do think he probably did some stuff, but I’m pretty sure he did a good job insulating himself,” the 35-year-old Republican said. A 48-year-old Republican woman said, “I think they’re going to find someone close to him to take the fall.” A 34-year-old man in the Democratic group said, “It’s like a mafia and he’s the mob boss — he’s smart enough to know how to keep out of trouble.”

Of the allegations against Trump, people were most troubled by the idea he’d engaged in a coverup, obstructed justice or told others to lie. “Promising pardons, telling people to lie — that’s the most concerning thing to me,” the 48-year-old Republican said. “If he encouraged people to lie, that’s a big thing of mine,” a 55-year-old independent woman said. “If he was obstructing justice, encouraging people to lie, firing people, his reason was just to cover up his secrets,” an 18-year-old Democratic woman said.

The participants shared a strong sense of right and wrong and a feeling that justice should be done. “If he did lie about some stuff, he should be accountable for that — he’s our President,” the 35-year-old Republican said. The 29-year-old Democrat asked, “What would happen to me if I did something like this? I wouldn’t be president.” A 38-year-old Democratic man replied: “You’d be in a jail cell.” He added, “You do the crime, you should be looking at the damned time.”

People didn’t like the idea that a politician might be subject to different rules than the rest of us. “Right is right. I don’t have a gray area for anybody, whether you’re the President or my husband,” a 49-year-old independent woman said, adding that she’d supported Bill Clinton’s impeachment and felt she should be consistent. She wasn’t the only one to mention the Clintons. “Where there’s smoke there’s probably fire,” a 41-year-old independent man said. “I had the same thoughts about Hillary Clinton, so to be fair, I should have the same thoughts about Donald Trump.” A 37-year-old Republican woman said, “It would be a serious issue if it were my son or daughter doing these things, so I would like [politicians] to have the same standard as I have for my kids or myself.”

In all the groups, participants expressed dismay at the atmosphere of political division and the negative tone of politics. Even the Republicans wished Trump would moderate his rhetoric and do more to unify people; even the Democrats said they hoped for the sake of the country that Trump wouldn’t be found guilty. “The man annoys me as a person—he’s obnoxious,” the 41-year-old independent said, adding, “For a lot of people I know, it was appealing at first, but I think it’s wearing on people.” A 57-year-old Democratic woman said, “I don’t want him to be guilty—he’s the President. He’s not my President, but I don’t want him to be guilty.”

The 29-year-old Democrat said, “I want him to be charged, because I think he has done wrong. But at the same time, the world is chaos and mayhem, and what is that going to do for the situation we’re already in? With all this, is it going to make everything more crazy?” 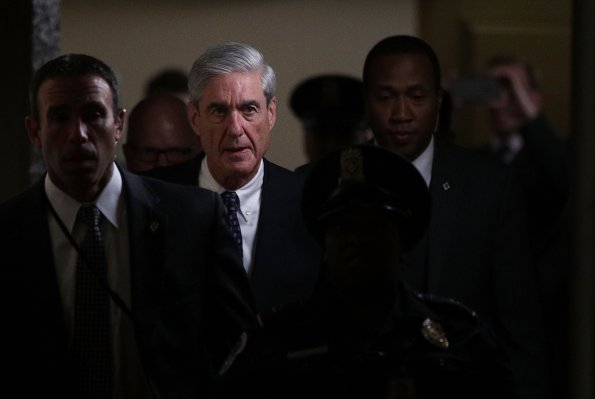 Here Are Some Key Players in the Mueller Investigation
Next Up: Editor's Pick