After Christchurch, Here's How We Can End Hate Speech and Islamophobia

Bhutta is director of communications at Amnesty International. Formerly he has been head of comms at Al Jazeera and a Scottish National Party adviser

Racists and bigots believe that diverse societies don’t work. Frustrated that their howling at the moon wasn’t enough, they’re now picking up weapons in an attempt to prove themselves right.

We can’t keep expressing shock and then moving on until the next outrage. We watched in astonished horror last year when a white supremacist entered a synagogue in Pittsburgh and shot dead 11 worshippers. And yet after the initial horror, the world carried on like before.

These haters are destabilizing our societies and concerted action needs to be taken before things get even worse.

To be clear, this isn’t just about Western societies. For many Muslims, the attacks on March 15 on Christchurch mosques that left 50 dead, represent just a tiny part of a global rising tide of anti-Muslim bigotry perpetrated by insecure majorities. From east to west, there are countless examples.

In Myanmar, decades of hate speech and persecution culminated in 2017 with over 700,000 predominantly Muslim Rohingya having to flee to neighbouring Bangladesh after a vicious campaign of ethnic cleansing. The implicated military in Myanmar has been given plenty of diplomatic cover by China, whose authorities are currently holding up to 1 million Uighurs, Kazakhs and other predominantly Muslim ethnic groups in euphemistically titled “transformation-through-education” camps in Xinjiang. It’s one of the stories of our age, subjugation on an epic scale.

Meanwhile, India’s historic multi-faith character has taken a hit under the leadership of Narendra Modi, a man who was chief minister during the 2002 Gujarat pogrom, which resulted in the deaths of hundreds of Muslims. His brand of Hindu nationalism has led to divisiveness rather than unity, leading to growing phenomena such as “cow-related violence”.

Many politicians across Europe have been gaining ground by peddling anti-Muslim messages. France’s Marine Le Pen compared Muslims spilling onto pavements from packed mosques after Friday prayers to Nazi occupiers. A key message of the Brexit campaign was the “threat” of Turkey joining the EU. Arch pro-Brexit campaigner Nigel Farage once accused British Muslims of having “split loyalties”.

The biggest beneficiary of ballot box Islamophobia though is Donald Trump with his campaign promise of a “total and complete shutdown of Muslims entering the United States.” He said that this ban would stay in place until the country’s representatives “can figure out what the hell is going on”. Trump arrived on the back of a generation of Islamophobia that went hand-in-hand with the controversial wars in Afghanistan and Iraq—wars that resulted in the still barely acknowledged deaths of hundreds of thousands of Muslims.

When the global picture is this grim, it’s little wonder that many Muslims feel embattled. Especially when they are also being told that despite these tragic numbers, they are actually the aggressors.

This is not, however, a religious conflict. The millions of Muslims who have lost their lives, been put in detention, or repressed in other multifaceted ways, have not been treated this way as part of a religious war. These are not the new crusades. The perpetrators are too diverse and too disparate for this to be case. So are the victims. Christians are also repressed in China, Pakistan and Indonesia. Christian and Muslim Palestinians face violence and discrimination every day. France and Germany reported disturbingly sharp rises in anti-Semitism last year; who can forget the distressing images of swastikas daubed across graves in Jewish cemeteries in Herrlisheim and Quatzenheim in eastern France? In light of the evidence, a “War on Islam” thesis doesn’t add up.

This is about how nation states treat their minorities. In this respect, Muslim-majority states are also often found wanting. Infamously there are no churches in Saudi Arabia. Given these circumstances, it was no surprise to see Saudi Arabia’s crown prince giving endorsement to China’s treatment of Muslim minorities in Xinjiang.

Harmony isn’t going to be achieved if only we had more interfaith dialogue and more mosque open days. Tackling this threat effectively requires a radical rethink about how we talk about freedom, equality and respect for all.

The strength of a nation lies in how well you treat all your people. It’s a mark of strength when you celebrate everyone who lives alongside you. We move forward when everyone has the freedom to live their lives as they wish, to contribute to their society as they see fit, and to be the people they want to be.

I grew up in Scotland and am proud of my nationality and my faith. We used to say that it takes many different colored threads to make tartan, just as it takes many different types of people to make Scotland. Every culture around the world must find their language to bring people together, rather than to drive them apart. In 1945, the Nazis were defeated through war. This time, we’ll beat the haters through the force of our love, compassion and shared humanity. 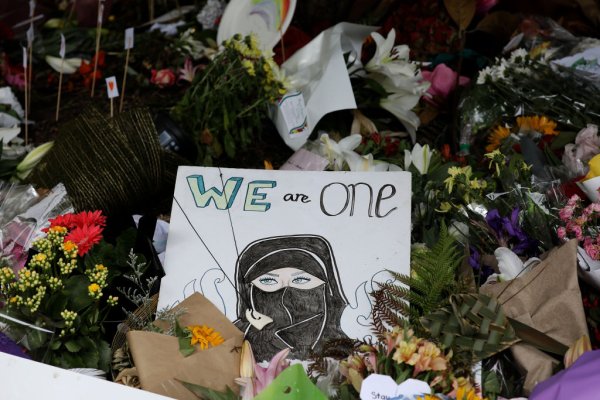 Where We Go Wrong in Comparing White Supremacy With ISIS
Next Up: Editor's Pick