What to Know About the Origins of Fascism’s Brutal Ideology

Adolf Hitler (left) and Benito Mussolini in a car, saluting the crowd that gathered along the thoroughfare Corso Vittorio Emanuele in Rome, in May 1938.
Mondadori Portfolio—Getty Images
By Olivia B. Waxman

When Benito Mussolini debuted the Fasci Italiani di Combattimento, the precursor to his fascist party, on Mar. 23, 1919, in Milan, he wasn’t inventing the idea of violent authoritarianism. But he put a name on a new and terrible breed of it. Under his leadership, squads of militants attacked, beat and killed fellow Italians; later, once he had become the authoritarian ruler of Italy, he oversaw brutality in Ethiopia, an alliance with Hitler and the persecution of Italy’s Jewish population and others, among other crimes.

Yet even a century later, during a new era of strongmen, his idea remains sadly powerful. “Fascism is a disease,” former U.S. Secretary of State Madeleine Albright told TIME last year, “and there are symptoms. So I think it’s important to warn about that.”

To better understand the rise and fall — and rise again — of fascism, TIME spoke to Ruth Ben-Ghiat, an expert on first fascist dictator Benito Mussolini and a professor of History and Italian Studies at New York University.

Fascism is a movement that promotes the idea of a forcibly monolithic, regimented nation under the control of an autocratic ruler. The word fascism comes from fascio, the Italian word for bundle, which in this case represents bundles of people. Its origins go back to Ancient Rome, when the fasces was a bundle of wood with an ax head, carried by leaders.

On March 23, 1919, the Fasci Italiani di Combattimento — a group that grew out of a number of earlier movements that had also used the image of the fascio in their names — met for the first time in Piazza San Sepolcro in Milan. At this rally, Mussolini said that membership in the new group “commits all fascists to sabotaging the candidacies of the neutralists of all parties by any means necessary.”

“Mussolini thought that democracy was a failed system. He thought that liberty of expression and liberty of parties was a sham, and that fascism would organize people under state power,” Ben-Ghiat says. “Their idea was you would be freer because you wouldn’t have any class consciousness. You’re just supposed to worship the nation. It’s nation over class.”

The corollary of that belief was the idea that anything that might impede national unity had to be gotten rid of, and violently. In fact, violence was seen as beneficial to society.

And “society” was not a loosely defined idea. Rather, Mussolini and those who came after him had very specific ideas about who got to be part of the nation. It followed that those who did not fit the mold were seen as disruptive to that unity, and thus subject to violence.

“You can look up definitions of fascism and often, if they’re not about Hitler, race won’t be in there,” Ben-Ghiat says. “That’s something that often gets left out, especially [when talking about] fascist Italy. There was this idea that Hitler was anti-Semitic and Mussolini wasn’t, but it’s about a larger concept of race. Mussolini was an imperialist, so he used colonialism to [abuse] people of color. The fear of white decline was a huge part of it. Women were supposed to go have a lot of babies to increase the white race. A lot of old-fashioned explanations of fascism don’t talk about that.”

Italian fascist dictator Benito Mussolini strikes a pose while skiing in Italy with his son in 1937.
ullstein bild—Getty Images

Mussolini was a journalist who founded the Milan-based newspaper Il Popolo d’Italia. Originally a socialist party member, he left the group when he fought in World War I. After the war, fascists declared the socialists public enemy number one over their anti-war positions. He became Italy’s prime minister in 1922 and over the next few years turned that position into one of dictatorial power.

“Benito Mussolini came up with the term fascism, he created the first one-party fascist state and he set the playbook and template for everything that came after,” Ben-Ghiat says.

An important part of that was the cult of personality that emerged around the Italian leader. “[Mussolini] was in newsreels, and he would strip his shirt off,” she says. Though others, like Lenin and Stalin, may be more associated with the idea of such a cult of personality, “of these cheering fans idolizing a leader,” she gives Mussolini credit for creating the mold.

“In the past, there was this idea that Mussolini copied Hitler, but it was actually the other way around for a very long time,” she adds. “Mussolini was in power 11 years before Hitler. He had things all worked out by the time Hitler came to power. Hitler was [initially seen as] a total loser. No one wanted to buy Mein Kampf. No one was interested in him. Then the Great Depression came, and he boomed. [Fascism] is a very important part of Nazism. It began with Hitler wanting to adapt what Mussolini had created. Hitler was such a fan of Mussolini; he was writing him, trying to get an autographed picture, trying to meet him.”

What contributed to the rise of fascism?

Mussolini’s establishment of the proto-Fascist Party took place not too long after the Russian Revolution, and the fear of communism’s spread played a key role.

“The main way the fascists got to power was by killing off and intimidating what was the largest and most popular party, the Socialist Party,” Ben-Ghiat explains. “Squadrists — terrorists who would descend upon towns in trucks, uniformed in black shirts — had knives and they killed thousands of people in the years 1919 to 1922. The killing went on after Mussolini became prime minister.”

Landowners and businessmen in particular supported the suppression of socialism, and their support allowed Mussolini to come to power. Afraid of the might of labor, they “cast their lot with Mussolini” instead. And that group included none other than King Victor Emmanuel III, whose authority would be considerably diminished under Mussolini’s dictatorship.

“Without that early support,” Ben-Ghiat says, “Mussolini wouldn’t have gone anywhere and wouldn’t have had the first fascist dictatorship.”

When did fascism end?

The defeat of the Axis powers in World War II meant the end of one phase of fascism — with some exceptions, like Franco’s Spain, the original fascist regimes had been defeated. But while Mussolini died in 1945, the ideas he put a name on did not.

“It’s really not understood how influential Italian fascism was, because you had Nazism early on, but there were fascist movements in America, in Switzerland, in France, in Spain, and then fascism spread in Argentina,” Ben-Ghiat says. “It’s a transnational movement. That’s how it stayed alive after 1945.”

And that “after” extends all the way to today. Though there was a taboo against the idea, at least in theory, after World War II, she has seen its return since the 1990s as a new wave of strongmen have come to power. With the help of coded language, the old ideas are returning. “We’re living in a time when fascism is getting rehabilitated, in Italy and in other places,” she says. “The fact that this is coming back now is disturbing. Fascism is becoming rehabbed for a new generation. Mussolini and Hitler are being idealized again.”

And some of the language isn’t even coded. “Berlusconi in Italy, when he was in power briefly in the 1990s, he brought the neo-fascists back into the government,” Ben-Ghiat points out. There have been spikes in hate crimes in many places; the President of the E.U. Parliament was forced this month to explain why he had hailed Mussolini; and the man charged with the massacre at two mosques in Christchurch, New Zealand, appears to have declared himself a fascist, according to a manifesto attributed to him.

So, Ben-Ghiat says, asking how fascism has changed during its century of existence is perhaps the wrong question.

“It’s more striking what hasn’t changed —the hyper-nationalism, the leader cult, the idea that this is a leader who is going to save us, the fear of white population decline, anti-feminism, anti-left, things like that,” she says. “None of those things have changed.” 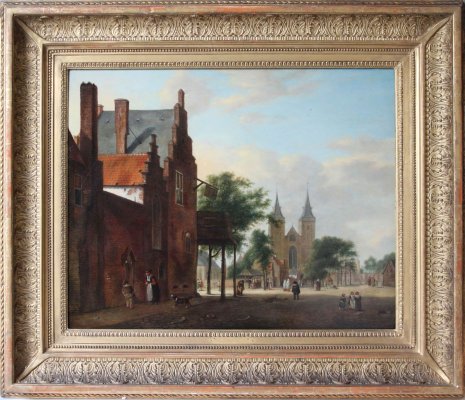 Looted by Nazis, Recovered, Sold Back to Hitler's Photographer's Daughter—How One Painting Got Back to Its Rightful Owners
Next Up: Editor's Pick