So many bloody battles have broken out over the course of Game of Thrones’ seven seasons that it’s hard to keep track of what’s happening in Westeros and Essos. Many of these conflicts — between the Targaryens and the Starks, those who worship the Old Gods and the New, the men and the White Walkers — have deep roots in the past.

The show often references historical events through conversations between characters (Ned and Robert, Jaime and Brienne, to name a few) as well as Bran’s visions. Even the map of Westeros (to the west) and Essos (to the East) in the show’s opening credits offers fans a brief look at what came before.

Now that we’re staring down the final episodes of the show, the ancient mythology and history of the Game of Thrones universe will likely have extended ripple effects on the ultimate endgame. Could Bran Stark’s knowledge of how the White Walkers came to be help his brother, Jon Snow, defeat them? Could the way Daenerys Targaryen’s ancestors used their dragons to conquer Westeros be a roadmap to the Iron Throne for Dany herself? Could the conflict between two Targaryens presage an unfortunate falling out between Jon and Daenerys?

Here are all the basics you need to know about the history of Westeros and Essos in Game of Thrones (just the show, not the Song of Ice and Fire books on which they are based). All the events are dated in reference to the Targaryen Conquest, BC (Before Conquest) or AC (After Conquest).

The First Men arrive from Essos to Westeros, a land occupied for centuries by the small human-like creatures named the Children of the Forest. The First Men take over their land and cut down Weirwood trees that are sacred to the Children. The Children and the First Men go to war for several centuries.

About 10,000 years before the events of Game of Thrones, the Children and the Men create a peace treaty known as “The Pact.” The two groups become allies, and the men even adopt the Children’s religion, worshipping the Old Gods and faces carved into Weirwood trees.

This is the era in which the upcoming Game of Thrones prequel will be set. The Age of Heroes begins with the sealing of the Pact. The time period is named after several larger-than-life figures who have become part of Westerosi myth by the time of Game of Thrones. Legendary figures include Bran the Builder and Lann the Clever, whose descendants became the Starks and the Lannisters, respectively.

By the time that Old Nan is telling tales to a convalescing Bran, stories of giants, Children of the Forest and even White Walkers have become legend. It’s only later that Bran discovers all these creatures to be real.

Around 8000 BC, a winter that lasts an entire generation overtook Westeros. The humans dubbed it “The Long Night.” With the cold came the White Walkers, who broke free of the Children’s control. The First Men and Children of the Forest try to drive the White Walkers to the North in what became known as the War for the Dawn. Bran the Builder builds the Wall to protect humans and the Children from the White Walkers invading again.

The Andals migrate from Andalos in Essos to Westeros, killing and conquering the First Men, south of the Neck over the course of several centuries. They spread their religion, the Faith of the Seven. across Westeros. Andal warriors carve the symbol of the faith, the Seven-Pointed-Star, into their foreheads. The Faith of the Seven becomes the dominant religion in Westeros, as led by the High Septon. Each High Septon wields immense power in Westeros, as demonstrated by the face-off between Cersei Lannister (Lena Headey) and the High Sparrow (the High Septon at the time, played by Jonathan Pryce) on the show.

The Andals believe that the Children of the Forest practiced magic that was antithetical to their faith and kill all but a few of the race. The Andals eventually conquer all of Westeros except for the North, where the Kings of the North and particularly House Stark continue to practice the traditions of the First Men, including worshipping the Old Gods.

A group of powerful families in the Valyrian freehold ruled over the continent of Essos for nearly 5000 years, thanks to their dragons. However, a string of volcano eruptions and subsequent earthquakes destroyed the city of Valyria and the surrounding area. Only one of the ruling families with dragons survived: House Targaryen. The family had established an outpost on Dragonstone before the doom, and they became the owners of the only dragons left on earth. During the show, Stannis Baratheon (Stephen Dillane) will use Dragonstone as his home base during the War of the Five Kings, and, once he dies, Daenerys (Emilia Clarke) takes over the deserted castle for herself.

The natural disaster led to political upheaval in Essos, with the Free Cities eventually establishing their independence. Valyria remained a smoldering wasteland, and the Free Cities began to exile sufferers of Greyscale to the peninsula.

Following the Doom of Valyria, Aegon Targaryen (a.k.a. Aegon the Conquerer) and his sister-wives, Rhaenys and Visenya, invade Westeros with their three dragons.

The High Septon also throws his support behind the mighty Aegon, essentially ending the war. Aegon briefly tries to conquer Dorne, but the Dornish avoid fighting with guerrilla tactics. Eventually Aegon allows Dorne to rule itself.

Aegon melts down all the swords of his enemies to create the Iron Throne. He begins the Targaryen Dynasty that will eventually end with Aerys II, the Mad King, who is Daenerys’ father.

A dragon from HBO's Game of Thrones
HBO

In the only civil war in the Seven Kingdoms, Targaryen fought Targaryen, and dragon fought dragon. The Targaryens never formalized their inheritance laws after taking over Westeros, leading to chaos when King Viserys I died.

Viserys I bequeathed the throne to his first child, a daughter named Rhaenyra. But the Seven Kingdoms had never been ruled by a queen before, and according to the inheritance laws of the Andals, a younger brother would rule over an elder daughter. So Rhaenyra’s younger half-brother, Aegon II, staged a coup against her. They went to war, killing most of the Targaryens’ dragons in the process. Eventually, Aegon II captured Rhaenyra and fed her to his dragon while making her son watch. Aegon II died only a few months later from a battle wound.

The Mad King Aerys II is the last in the Targaryen line to rule. He becomes paranoid about his family and Small Council members trying to manipulate him, including his Hand, Tywin Lannister. He refuses to let Tywin’s daughter, Cersei, marry his son, Rhaegar, despite Cersei hearing a prophecy that she would marry the king. Instead, Aerys pairs Rhaegar with Elia Martell of Dorne. Aerys burns his enemies with wildfire.

During his rule, Aerys attended the Great Tourney at Harrenhal, where he admits Jaime Lannister to the Kingsguard in order to insult Tywin. (Tywin’s less-loved son, Tyrion, not Jaime, will become his heir as a result.) Aerys’ oldest son, Rhaegar, won the tournament and laid the winning rose in front of Lyanna Stark of Winterfell, rather than his own wife, Elia Martell.

Lyanna Stark runs away with Aerys’s son, Rhaegar Targaryen, despite being betrothed to Robert Baratheon. Robert claims that Lyanna was abducted and leads a rebellion against Aerys.

Lyanna’s oldest brother Brandon rides to King’s Landing to demand justice for his sister, and Aerys executes both Brandon and his father, Rickard. (Hence Sansa’s nervousness about Jon and House Stark allying themselves with Daenerys, a Targaryen, in recent seasons of the show.) Houses Stark, Tully, Arryn and Baratheon join forces in the rebellion against Aerys. Rheagar fights the rebels but is killed by Robert in the Battle of the Trident. Audiences never see this on the show, but Ned and Robert both talk about those events in the first season.

Tywin betrays Aerys: After claiming he will defend the capital from the rebels, Tywin turns around and sacks King’s Landing with his army. Aerys demands that Jaime Lannister kill his father and that the King’s Landing pyromancer attack the rebels with wildfire. Jaime instead kills Aerys and becomes known as Kingslayer. (He admits to Brienne on the show that he didn’t kill Aerys for power but because Aerys had become obsessed with wildfire and wanted Jaime to kill his own father.) Robert takes the throne and marries Cersei Lannister to shore up his alliance with the Lannister family.

Meanwhile, Aerys’ wife, Queen Rhaella, gives birth to a daughter, Daenerys on Dragonstone. During her birth, a storm wrecks what’s left of the Targaryen fleet, giving her the name “Daenerys Stormborn.” Targaryen loyalists smuggle Daenerys and her older brother Viserys, the heirs to the throne, to the Free Cities, where we first meet them on the show.

Meanwhile, as seen on the show, Ned Stark discovers his sister Lyanna with Rhaegar’s child, Jon Snow. He pretends the child is his own bastard to hide Jon’s Targaryen blood. Bran uses his greenseer abilities to watch Ned Stark fight Ser Arthur Dayne to reach his sister in the Tower of Joy, and see Jon’s birth. Gilly and Sam discover that Lyanna and Rhaegar wed in secret in records in the Citadel.

Robert rules unchallenged. (Daenerys and her brother Viserys are hiding out in Essos.) Robert contends with Tywin Lannister’s efforts to influence the affairs of Westeros. After his Hand, John Arryn, dies, Robert asks Ned Stark to be his Hand.

The show begins as Ned agrees to become Robert’s Hand, only to discover that Joffrey isn’t Robert’s son, but Jaimie’s. Cersei Lannister engineers a hunting accident that takes Robert’s life and puts Joffrey on the Iron Throne. Ned is executed. All hell breaks loose. Meanwhile, Daenerys seizes the moment of instability, kills her brother, and allies herself with the Dothraki and begins to build her legend. Thus the major characters start to play the Game of Thrones. For a summary of what has happened on every episode on the show, look no further than TIME’s recap of every episode of the show. 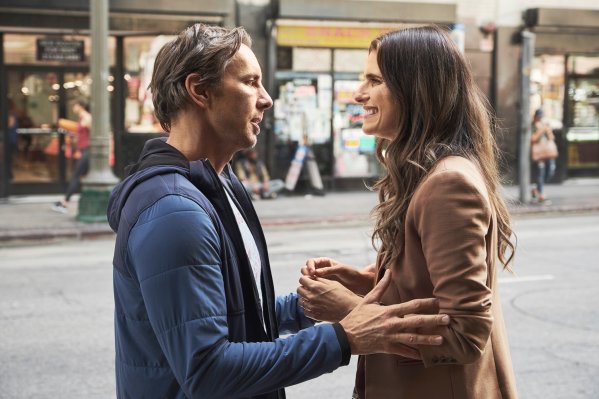 'Bless This Mess' Is the First Promising Network Sitcom of 2019
Next Up: Editor's Pick