Paul Manafort helped pioneer the business of helping foreign governments sway American policy, but his prison sentence on Wednesday may mark the end of the era he helped kick off.

For hiding his work advising politicians in Ukraine and the tens of millions of dollars he received for it, the former chairman of Donald Trump’s presidential campaign was sentenced to a total of seven and a half years in federal prison by two separate judges.

The longtime Republican consultant “spent a significant portion of his career gaming the system,” she told the courtroom. “It is hard to overstate the number of lies and the amount of fraud and the amount of money involved.” Prosecutor Andrew Weissmann described Manafort’s work as “corrosive to faith in the political process, both in the United States and abroad.”

Last week, a federal judge in Virginia sentenced Manafort to four years for tax and bank fraud hiding the money he made. On Wednesday, Jackson added three and a half years to that sentence for his failure to register his actions on behalf of the government of Ukraine, that country’s pro-Moscow Party of Regions and former Ukrainian President Victor Yanukovych.

Manafort’s case had already sent a message to the D.C.’s foreign lobbyists, but the jail time put an exclamation point on it.

When he and a former partner, Rick Gates, first faced charges for failing to register under the Foreign Agents Registration Act, lobbyists and public relations firms rushed to update their paperwork and, in some cases, registered for the first time.

The FARA law was passed in 1938 in response to pro-Nazi propaganda efforts trying to influence American views of Hitler’s Germany. Under the law, individuals in the U.S. working to help foreign governments influence U.S. policy must register with the Justice Department and provide updates on what countries they represent, how much they are paid and their activities.

Former prosecutors said that foreign lobbyists like Manafort should expect more scrutiny in the future.

“It’s clear that FARA enforcement has been relatively dormant for a long time,” Duncan Levin, a former federal prosecutor in the Eastern District of New York and former chief of asset forfeiture in the Manhattan District Attorney’s Office, told TIME. The public can expect to see a “new dawn” in cases exposing people who have made money representing foreign governments but failed to disclose those ties, Levin said.

“All you have to do is look at the [2016] election to see that unregulated foreign agents can pose a major threat to the U.S. election process,” Levin said.

Indeed, the Justice Department has recently added prosecutors to a unit that enforces FARA — headed by a former prosecutor from Special Counsel Robert Mueller’s team — with agency officials saying earlier this month that those investigations would be a priority.

In the early 1990s, Manafort and has partners, Roger Stone and others, advised clients including Filipino dictator Ferdinand Marcos, Zaire President Mobutu Sese Seko and Jonas Savimbi, the former Angolan rebel leader responsible for trading millions of carats in diamonds for weapons. In the years following the fall of the Berlin Wall in 1989, Manafort also developed a niche advising the campaigns of politicians running in newly founded democracies in former Soviet Bloc states.

But it wasn’t until he stepped into the limelight, managing the Republican national convention for Trump, that Manafort’s work started to draw attention from prosecutors.

As with other key players in the 2016 election, Mueller pursued the charges in part to try to entice Manafort into cooperating by testifying about what he knew. After a jury convicted him on eight financial crimes in Virginia, Manafort pleaded guilty in the D.C. case and began cooperating with the Mueller investigation.

But that cooperation deal fell apart after investigators said that Manafort was not truthful, including about central parts of the probe.

Still, lobbyists for foreign governments can take comfort from the fact that Manafort’s crimes were not just failing to register but also included hiding that income on his taxes and bank forms as well as his handling of the investigation.

“Had Manafort not lied to Mueller’s team, he would be in and out of federal prison in a just a few short years,” Levin said. “The lie to Mueller is becoming his most serious thing that happened to Manafort,” Levin said.

Trump has repeatedly showed sympathy for Manafort and his reaction to Wednesday’s verdict was no different. “I feel very badly for Paul Manafort,” Trump told reporters during a White House meeting highlighting drug trafficking at the border. “It’s a very sad situation,” Trump said, adding that he has “not thought about” a pardon for Manafort.

But even a pardon would only help Manafort so much. Manafort is now facing charges in New York state for mortgage fraud. If convicted and sentenced in that case, he could face serving time in New York State prison, which a Trump pardon could not save him from. 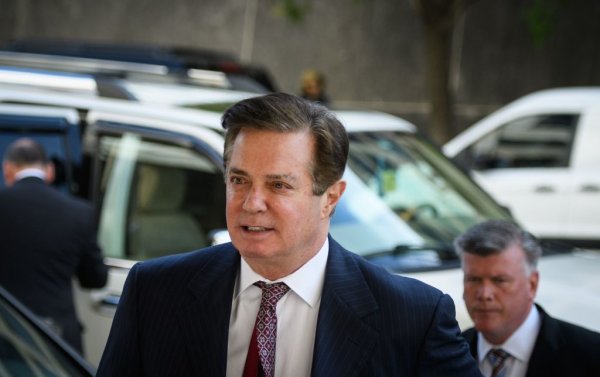 How Trump Led to Manafort's Downfall
Next Up: Editor's Pick