Gordon Ramsay is known for his genius in the kitchen and his genius in coming up with new ways to disparage the contestants who dare to step foot into Hell’s Kitchen, his reality cooking. Back in 2015, he roasted himself, though, in a sketch on James Corden’s Late Late Show. In a bit, he pulled out two slices of bread, slapped them on to a fake contestant’s cheeks and declared her an “idiot sandwich.” His invective was perfectly on-brand for Ramsay as it was both brutal and hilarious and quickly became a staple of GIF-based meme culture.

Ramsay returned to The Late Late Show on Tuesday, where the Masterchef host told Corden what his public life has been like since he became a meme. “I’ll be at a book signing […] and they’ll just take out two slices of bread from their satchel and say, ‘Can you call me an idiot sandwich?’” Ramsay told Corden, laughing. He has even had his kids’ friends approach him at school with bread at the ready in case he feels like calling them names.

Ramsay is not only a master at cooking and insulting people, but in marketing, too. During his late night stopover, he revealed that he is cashing in on the meme by selling idiot sandwich ear muffs at his restaurant in Las Vegas, so anyone with enough cash to buy them can be called an idiot sandwich for doing so. 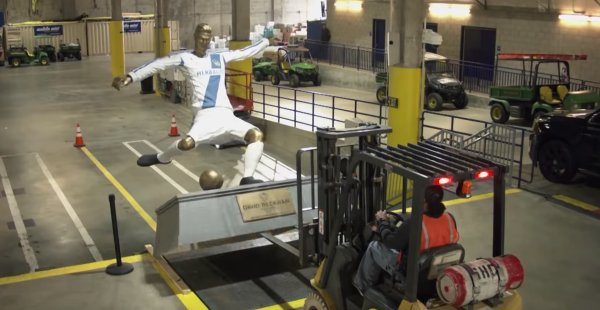 'It’s Embarrassing.' David Beckham Did Not Care For Getting Pranked With an Absolutely Hideous Statue of Himself
Next Up: Editor's Pick