Tesla Is About to Introduce the 'Model Y.' Here's What We Know About the SUV So Far

Electric automaker Tesla has plenty on its plate at the moment. It’s partially backtracking on a plan to move to an online-only sales model, it’s dealing with skepticism regarding consumer demand, and its charismatic CEO Elon Musk is, once again, in trouble with regulators over his tweeting habits.

It’s against that backdrop that the Palo Alto-based company is about to add yet another project into the mix: The Tesla Model Y, an all-electric SUV.

Tesla is set to unveil the Model Y on March 14 at the Los Angeles Design Studio. Details concerning the new vehicle are scarce, but Musk says the SUV will be bigger than the company’s latest Model 3 sedan.

Here’s what to expect from the Tesla Model Y SUV.

The Tesla Model Y is another SUV

According to a series of tweets from Musk himself, the Model Y will be an SUV “about 10% bigger than Model 3.” Since the SUV will be built using a majority of the Model 3’s existing parts, that could make it easier for Tesla to get some production-ready vehicles out the door more quickly. (Delays have been a big issue for Tesla, and Musk has in the past lamented being stuck in “production hell.”) But that also means you probably shouldn’t expect to see the gullwing-style doors on Tesla’s other SUV, the Model X, appear on the Model Y.

While Musk has said the Model Y will share the Model 3 platform, it is expected to include a slew of differentiating features, including a third row of seats and updated instrument panels.

Tesla recently announced a handful of updates dedicated to increasing charging speeds for all its vehicles, including the reveal of its V3 Supercharger, an updated charging method that Tesla says will “ultimately cut the amount of time customers spend charging by an average of 50%, as modeled on our fleet data.”

Tesla is still testing the updated charging station with select owners, and is breaking ground on the first public V3 Supercharger location next month. The Model 3 sedan will be Tesla’s first vehicle to support the faster charging speeds, Tesla says. But its announcement also mentioned the Model Y, which shares the Model 3 platform. The Model Y will have a slightly shorter range than the Model 3 despite the identical battery.

That means the Model Y could be the second Tesla vehicle to support the V3 Supercharger and its 250 kWh peak charge rate. Tesla says it will accelerate V3 Supercharger installation in “Q2 and Q3,” so you might see one sooner than you think. What you won’t see for a while, however, is the Model Y, because…

Tesla’s struggle to produce enough Model 3 sedans in 2018 could be alleviated by both the expansion of its current Fremont, California manufacturing facility and the addition of a new “Gigafactory” to build vehicles more affordably for its overseas customers. In a shareholder’s letter from Q4 of 2018, Musk says the company would be gearing up for Model Y production and would reach volume production “by the end of 2020, most likely at Gigafactory 1.”

Some entry-level Model Y units will be built in China

That doesn’t mean every Model Y will be made in America. Tesla recently broke ground on a new Gigafactory in Shanghai, China — one that will produce base Model 3 sedans in 2019 and, in 2020, base Model Y SUVs for the country in order to lower prices. “Detailed specs & pricing will be provided,” said Musk on March 3. 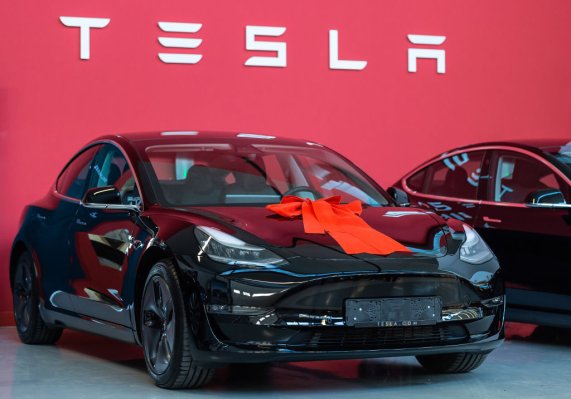 Tesla Launches Its Highly Anticipated Model 3 Starting at $35,000
Next Up: Editor's Pick