When we last saw Cersei Lannister (Lena Headey) in Game of Thrones season 7, she had finally managed to alienate her twin brother Jaime (Nikolaj Coster-Waldau) — the one person who had always been loyal to her — by refusing to send the Lannister army north to fight in the war against the dead. She also announced that she was pregnant with Jaime’s child, launching a good old Game of Thrones fan debate about whether or not this was true.

However, in the new Game of Thrones season 8 trailer that dropped on Tuesday, Cersei is shown tearing up while drinking a glass of wine. Now, that’s not to say that drinking is at all out of character for Cersei. But when Tyrion (Peter Dinklage) and Cersei were reunited in the season 7 finale, “The Dragon and the Wolf,” it seemed like part of the reason he was able to guess that she was pregnant was that she wouldn’t drink the wine he poured her.

If Cersei is off the wagon in season 8, it could mean that she either miscarries or was never actually pregnant at all. And if you’re someone, like Cersei, who gives credence to the valonqar prophecy, it seems like that was the inevitable outcome all along.

In a flashback sequence in the season 5 premiere, we saw a young Cersei having her future told by a witch named Maggy the Frog (Jodhi May). “Everyone wants to know their future, until they know their future,” Maggy tells her. “You will never wed the prince, you will wed the king…You’ll be queen, for a time. Then comes another — younger, more beautiful — to cast you down and take all you hold dear…The king will have 20 children, and you will have three…Gold will be their crowns, gold their shrouds.”

Almost all of these predictions have already come true. Cersei was promised to Prince Rhaegar Targaryen (Wilf Scolding) as a young girl, but ended up marrying King Robert Baratheon (Mark Addy) following Robert’s Rebellion. He went on to father many illegitimate children while Cersei’s three kids — who are all dead — were a product of her incestuous relationship with Jaime. The only ambiguity is the mention of the younger, more beautiful queen, who some think was Margaery (Natalie Dormer) and others believe will turn out to be Daenerys (Emilia Clarke).

However, in A Feast For Crows — the fourth novel in George R.R. Martin’s A Song of Ice and Fire series — there is a final line of the prophecy that the show did not include: “And when your tears have drowned you, the valonqar shall wrap his hands about your pale white throat and choke the life from you.”

Since “valonqar” means “little brother” in High Valyrian, in the books, Cersei long assumes that Maggy the Frog was talking about Tyrion. However, as the second-born twin, Jaime is technically also her little brother.

We’ve hardly ever seen Cersei cry. So it seems significant that there will be a season 8 scene in which she openly weeps when her tears are supposedly a harbinger of her death. Could Jaime be destined to return to King’s Landing and become a queenslayer as well as a kingslayer?

As Olenna Tyrell (Diana Rigg) warned Jaime about Cersei right before her death, “She’s a disease. I regret my role in spreading it. You will too.” 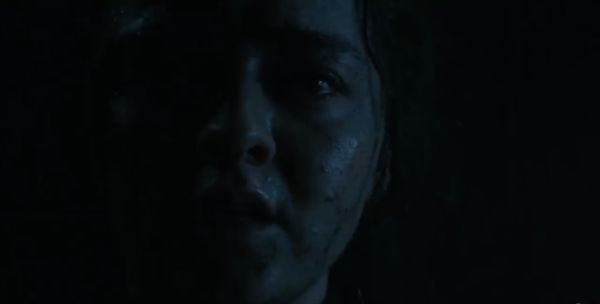 People Have Theories About Who Arya Stark Is Running From in the New Game of Thrones Trailer
Next Up: Editor's Pick