If you somehow weren’t already anxious about what’s to come in Game of Thrones‘ final season, then the first few seconds of the new season 8 trailer will likely push you over the edge.

The trailer opens with a clearly terrified Arya Stark (Maisie Williams) breathing heavily and gathering herself before sprinting down what looks like a corridor in Winterfell. We can’t see who or what she’s running from, but the preview then cuts to what seems to be an earlier shot of her holding up a dagger made of dragonglass, one of the two materials that can kill White Walkers and wights.

“I know death, he’s got many faces,” she says. “I look forward to seeing this one.”

If it’s safe to assume that Arya’s running scenes take place during the final showdown between the living and the dead that is set to take place at Winterfell, then it seems likely that whatever enemy is chasing her is probably undead.

However, it would be out of character for Arya, a hardened and seemingly fearless faceless assassin, to be scared of any old wight — or even White Walker — especially when she has a weapon that can effectively be used against them.

So what could possibly be capable of frightening Arya so badly? Given that so much focus has been placed on the Winterfell crypts in Game of Thrones‘ season 8 teasers, some fans are theorizing that the Night King will find a way to reanimate the bodies of Arya’s dead family members and set them loose in Winterfell.

Arya’s father, Ned Stark (Sean Bean), and older brother, Robb Stark (Richard Madden), no longer have heads, so they may be kind of hard to recognize. But seeing the reanimated corpses of her mother, Catelyn Stark, (Michelle Fairley), or younger brother, Rickon Stark (Art Parkinson), seems like it could definitely put the fear of God in Arya.

The reappearance of Catelyn seems like a particularly feasible option as a nod to the Lady Stoneheart storyline from George R.R. Martin’s A Song of Ice and Fire book series that never made it into the show.

However, other fans are speculating that it may have nothing to do with the Starks at all, and that the enemy in question will actually be a reanimated or still living Littlefinger (Aidan Gillen), who Arya executed on her sister Sansa’s (Sophie Turner) orders at the end of season 7.

Or maybe Arya is just putting on an act to lure her opponent to a more advantageous location — just like she did with the Waif in season 6. 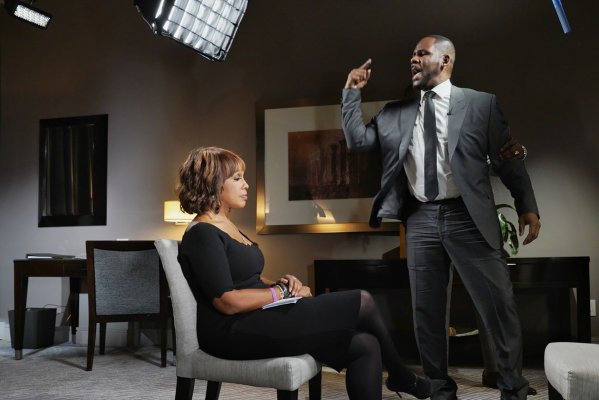 Here's What Went Through Gayle King's Mind When Her R. Kelly Interview Took a Frightening Turn
Next Up: Editor's Pick