With just a little over a month to go until the Game of Thrones season 8 premiere, HBO has finally released a trailer for the show’s final six episodes.

The two-minute preview seems to largely tease the final showdown between the living and the dead that is set to take place at Winterfell and will supposedly make “Battle of the Bastards look like a theme park”. However, we also get some glimpses of what Cersei’s up to in King’s Landing.

Here’s TIME’s second-by-second breakdown of the Game of Thrones trailer, which features plenty of foreboding voiceovers, shots of all our favorite characters looking anxious, and, as always, dragons.

0:02: A clearly terrified Arya — who looks to be sporting a nasty face cut — sprints down a Winterfell corridor as the first voiceover starts up: “I know death, he’s got many faces,” she says. “I look forward to seeing this one.”

0:15: Varys looks to be hiding among a group of women and children. The Spider has never been much of a fighter.

0:20: An uninjured Arya holds up a dragonglass dagger, one of the two weapons that can kill White Walkers, as she finishes the line from her voiceover. The face of death she’s looking forward to seeing this time is apparently the Night King.

0:28: Meanwhile, a much larger fleet of Greyjoy ships carrying the Golden Company, the mercenary company that Cersei sent Euron to retrieve, is also making their way somewhere.

0:30: Surprise! Tormund and Beric survived the Night King’s assault on the Wall. Now, they’re walking down a dimly lit corridor with someone who looks like Dolorous Edd.

0:32: Bran and Sam are once again conferring as a Bran voiceover that seems to be about Jon plays. “Everything you did brought you where you are now,” he says. “Where you belong. Home.”

0:37: Cersei is smiling with Qyburn and the Mountain at her side. Either something really bad is about to happen or she’s getting ready to greet the Golden Company.

0:40: A young boy living in the winter town looks on as the Unsullied march toward Winterfell.

0:43: Danerys and Jon are also with the Unsullied, of course.

0:45: Sansa catches a glimpse of Daenerys’ dragons for the first time as they fly over Winterfell.

0:54: Daenerys finds Jon in the Winterfell crypts. Could this be after Bran and Sam tell him that he’s actually a Targaryen?

0:58: Gendry is getting back to his blacksmith roots by working in the Winterfell forge.

1:02: Missandei and Grey Worm share a passionate kiss before he goes off to battle.

1:03: Jaime cuts down enemies in the midst of a fiery blaze. Did the Kingslayer make it to Winterfell just in time for the Night King’s arrival?

1:07: Cersei can’t even put down her glass of wine when the world is about to end.

1:10: Quick break from the action for some scenic aerial shots of Dany’s two remaining dragons.

1:14: Here’s that scene from the teaser HBO released on Feb. 24 showing Arya catching sight of the dragons for the very first time.

1:17: Grey Worm dons his helmet. That’s the second shot of Grey Worm heroically preparing for battle, which doesn’t seem to bode well for the leader of the Unsullied.

1:18: Jon stares up at a heart tree, a Weirwood tree that has a face carved into the wood of the trunk, in the Winterfell godswood. As we know, the Children of the Forest created the Night’s King on the site of a heart tree.

1:19: For once, the Hound doesn’t look completely terrified by fire being close to his face.

1:20: Jaime tells someone (likely Jon) that he is planning on fighting in the face-off between the living and the dead. “I promised to fight for the living,” he says. “I intend to keep that promise.”

1:21: Jon takes hold of his sword and charges across a fiery landscape with no one else around him.

1:22: Soldiers charge through a tunnel but it’s unclear where they’re going or who they’re fighting for.

1:23: Daenerys and Jon pay a visit to Drogon and Rhaegal. Could it finally be time for Jon to embrace his Targaryen heritage and ride the dragon named after his father?

1:27: Daenerys isn’t looking so happy herself.

1:30: Drogon, on the other hand, is ready for all hell to break loose.

1:32: And last but not least, the Unsullied, Brienne, Pod and Jorah all look out across the fields of Winterfell as the Night King approaches.

Watch the full Game of Thrones trailer above. 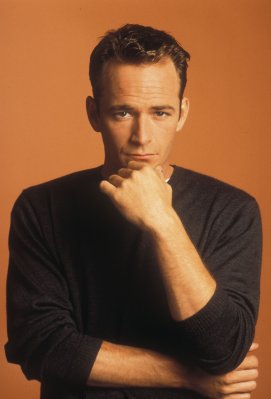 Luke Perry Was the Perfect Throwback Idol for a Nostalgic Era
Next Up: Editor's Pick