'America Has Been Divided Since the Beginning.' One Author on Why Educating Kids About Race in the U.S. Is More Important Than Ever

Black History Month offers a time to reflect on the past, acknowledge the present, and question the future of race and our civil rights. The importance of such reflection is heightened at a time when the number of hate groups and the frequency of hate crimes are on the rise.

With 2019’s month-long celebration of Black History coming to an end (“Negro History Week” was its predecessor until 1976), TIME spoke with Khalil Gibran Muhammad, author of The Condemnation of Blackness: Race, Crime, and the Making of Modern Urban America and a Professor of History, Race and Public Policy at the Harvard Kennedy School, about why teaching black history—and teaching it the right way—is so important in today’s complicated social and political climate.

TIME: Why is it important to acknowledge black history and Black History Month?

MUHAMMAD: Black History Month is important, not only because in its earliest days it was an acknowledgment of the contributions of black people to American democracy. But even over the last 40 years, when it went from a week to a month, it has become increasingly important to explaining how the nation became a nation that is multiracial, that is a nation that enshrines certain guarantees of equal protection in the 14th Amendment.

None of what we call civil rights today makes sense without understanding black history.

What has the Age of Trump done for civil rights, especially for the African-American communities?

Since President Trump was elected in 2016, the broadest definitions of civil rights have been challenged across multiple communities.

For African-Americans, the threats that they face, some are old, some are new, but some of the newer ones have to do with the fact that we have a police community in this country that is retreating from some of the commitments that were made under the Obama Administration for police reform. And some of those things have been put on hold or repealed altogether.

I think that we’ve long-known that politics matters to defining the cultural norms and social norms of our country. So who’s in charge, Presidents actually matter. And the role of President Trump in giving license to various forms of hate — hate speech, racial epithets, acts of hate. We’ve seen instances of swastikas being sprayed on the sides of buildings in liberal cities around America. Or nooses hanging on co-workers’s desks.

So I think while it’s hard to draw a direct line from the President to all of this behavior, we certainly can draw a dotted line. And in that sense, he has not used the power of his office or the power of the pulpit to define an America that is free of racial hatred, but in fact has excused much racial hatred as a kind of “they get to behave this way too.”

Have you seen any of advances under Trump?

And while that is true as unemployment rates are measured, it does not capture people who have given up looking for work. And we have significant evidence that there are substantial populations, particularly in cities, of African-American men who are jobless, and those joblessness rates haven’t moved much.

President Trump is in a class all his own when it comes to leadership from the White House. He has evoked of course Andrew Jackson as his hero, in terms of inspiring his approach to governance, and Andrew Jackson now hangs in the Oval Office. And it’s certainly true, Andrew Jackson was avowed in his white supremacist notions, and particularly, animus towards Native American populations.

I also think about President Woodrow Wilson, who was in office from 1913 to 1921. His Administration shared many of the same demographic changes, from European immigration, from questions about the role of Asian Americans in American life, to the reemergence of the Ku Klux Klan, and in that sense, a lot of xenophobia and nationalism and white supremacy that has emerged under the Trump Administration was very much a part of his Administration. And he performed very poorly in that regard, often giving license to what was happening in this country.

Why are these things still happening now? Why are we still reading about the Ku Klux Klan in the news?

A lot of people often ask the question how could it possibly be that the Ku Klux Klan is still around, that various forms of white supremacy and white nationalism are surging in our society with hate crimes on the rise.

One way to explain this is that there have always been reactions against racial progress. That the country has never fully divested across the board of the notion that this was a white Christian nation for white people. And therefore anyone else here, we’re here at the leisure or at the gratefulness or mercy of a white-dominant population.

It’s also true that the legacy of slavery and the Civil War didn’t just die an ignoble death. But in fact were resurrected in Confederate monuments, numbering over 1,000 across the country. And the politics of knowledge about what happened in the Civil War means that a lot of Southerners born in each generation, and in some ways Northerners too, where Confederate flags can be found across this country, have been taught that this was not about racism and not about slavery, but about Southern heritage.

So, America has been divided since the beginning. Remains divided. And seems unfortunately to be doomed to continue to debate what this country’s values, core values, really are.

How do you feel about the recent blackface scandal?

I think that these things are never linear and this is a big country. When we think about the recent blackface scandal and #MeToo scandal in Virginia, it is obvious that men of a certain generation are not able to entirely escape their own past, despite what their formal politics are as Democrats, in the case of Ralph Northam, or even Justin Fairfax around allegations of sexual harassment. And so we shouldn’t entirely be surprised that blackface is buried in the past of a former Virginian coming-of-age in the post-Civil Rights Era surrounded by a changing demographics of the white south where Confederate flags and monuments were very much alive and well.

One of the things I think is important about both looking at this as a moment that says we still have work to do, even for people who are self-defined liberals and Democrats, is to be more honest about their own coming-of-age in a racist country. And if people like that can take this moment when they’ve had to face down their pasts and to be held accountable for the political process, if they could be honest about the fact that when a blackface image of you shows up on your yearbook page, whether it’s you or not, which is unbelievable, but putting that aside that your fellow students thought it was funny and interesting. The editors of the book thought it was okay to publish, and the school thought it was okay to publish. And until we can have that conversation about the consumption of racism, both in terms of imagery and in terms of policy, then we’re not going to see the fast or hard break from the past that keeps popping up.

What would you say to someone who does not listen to facts and reason about issues of race?

Sometimes people express frustration that no matter how much information you share with someone and how compelling your set of arguments are and what you point them to, to read, they still don’t change. They still don’t believe white privilege is real. And I would say that while you still have to press forward, you have to make the case, you may not win those arguments, the real opportunity for us starts with our kindergarteners.

It starts with being honest about our history, which we’ve never done. I mean the one thing I can say with honestly and clarity for a country that believes in innovation, that believes in science, at least until 2016, we have not been honest about our history. The kinds of books that are on the shelves of our academic libraries, the kinds of books that are written by thoughtful writers, and other thinkers, are not changing how we teach our children fast enough.

And so I think that the hope for me is that if we can take on that work together, if we can be serious about changing what we teach our kids, then we can expect different adults. And if we get different adults then they’ll understand to be more vigilant about not repeating the mistakes of the past.

Is there one specific historical event or figure you think the textbooks have gotten wrong?

If we could imagine what it means to teach 5-year-olds something different about our history, and be more intentional about what that looks like. The first thing I think is that we can’t make the assumption that 5-year-olds are color-blind because children see difference in the world, just like they know the difference between a tree and a blade of grass. Between mommy, daddy, and their friends or strangers. They also recognize skin color differences. And if we leave them on their own to fill in the blanks, they’re going to learn from society. They’re going to pick up all the cultural cues that exist in our world.

So we have to be intentional and actually reject the notion that those 5-year-olds are color-blind. But we also could be more deliberate about what we teach them in class. And one way to think about this is if you ask children of elementary age who are the most famous Americans who are not Presidents, the two most commonly cited people are Dr. Martin Luther King, Jr. and Ms. Rosa Parks.

What’s interesting is that I would say if you could pick two people to completely rewrite the story of, they are the perfect candidates. Because their familiarity already over-indexes for the kind of superficial history that we’re teaching our children. The kind of Black History Month bulletin board of which they become prominent figures. Or art projects of which they’re redrawn. Or reenacting the famous March on Washington Movement, or her sitting down on the bus.

Both of them are literally 180 degrees more complicated and quite different than we like to remember them. And if we could take on rewriting in an accurate way the history of those two individuals, their own lives would be potentially the recreating of a new America. 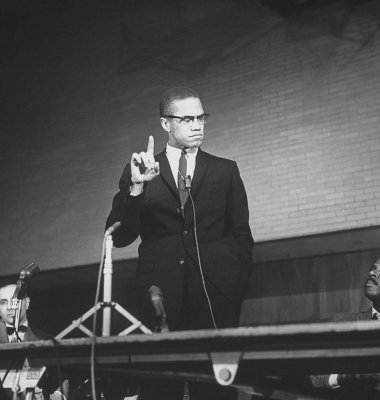 The Enduring Mystery of Malcolm X's Assassination
Next Up: Editor's Pick