Yes, winter is cold for most of us mere human mortals. But a Canadian couple has had it with people concerned about their dog’s welfare just because of the temperature. The husky mix, Riley, has often been spotted outside in their yard in Charlottetown, leading to complaints to the local Humane Society — all of which, they insist, is a big misunderstanding about the breed and the way they care for their three-year-old pup.

In fact, they’ve put up a sign outside to discourage passersby from being concerned: “The husky is not cold! Leave us alone,” the sign reads. Owner Courtney Porter, who is studying to be a veterinarian, described her dog Riley to local news as a wild rescue dog that was “found in the woods.” (Oddly enough, he was adopted from the Humane Society.) He’s also high energy and generally prefers spending time outdoors or he might get too hot.

“We would have to medicate him if we had to force him to stay inside, which would be unfortunate,” she told local news. After the Humane Society duly investigated, they did require the couple did buy a doghouse. But Porter notes that Riley is “in and out lots” of their own home, as he pleases.

“Our dog isn’t outside all day — it looks like he’s outside for hours and hours on end, but… it’s not always how it appears,” Porter said. “I think people are just not totally educated about the breed.” 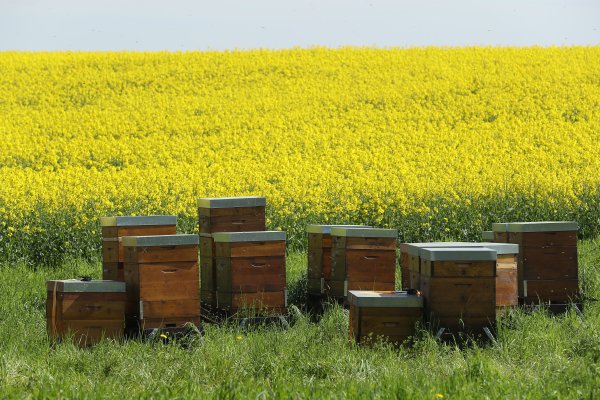 'Flying Bulldog.' People Are Understandably Abuzz About the World's Biggest Bee Returning After Disappearing 38 Years Ago
Next Up: Editor's Pick