Kim Jong Un's Jogging Bodyguards Are Back for Summit in Vietnam

North Korean leader Kim Jong Un arrived in Vietnam Tuesday for his second summit with President Donald Trump — and his detachment of bodyguards, famous for jogging alongside his motorcade, were right there with him.

The group of 12 men, all of them wearing black suits, striped ties and personalized badges pinned to their lapels, flanked Kim’s limousine as he left his hotel for the North Korean embassy in Hanoi on Tuesday.

They are part of an elite military group known as the Main Office of Adjutants, or the Central Party Office #6, according to the BBC. To become one of Kim’s elite guards (the group is comprised of between 200 and 300 personnel), potential recruits are subjected to rigorous background checks — family members going back two generations can be vetted. Recruits tend to be drawn from elite North Korean families.

Other members of Kim’s security detail are drawn from the Guard Command, likened to to the U.S. Secret Service, responsible for safety and welfare of Kim Jong Un, his family and senior DPRK officials.

It is not the first time Kim’s jogging bodyguards have accompanied him, they also traveled to Singapore with the North Korean leader for the last summit with President Trump in July and previously to the inter-Korea summit in April.

According to North Korea Leadership Watch, other, less visible, members of Kim’s security detail are drawn from the Guard Command — a group of approximately 95,000-100,000 personnel spread across North Korea. It’s estimated the Main Office of Adjutants — part of the Guard Command — has around 200-300 personnel; they are some of the only North Korean citizens allowed to carry guns next to their country’s leader.

Kim and his entourage arrived in Vietnam on Tuesday to a red carpet welcome, after an almost 70-hour ride through southern China in his armored train. 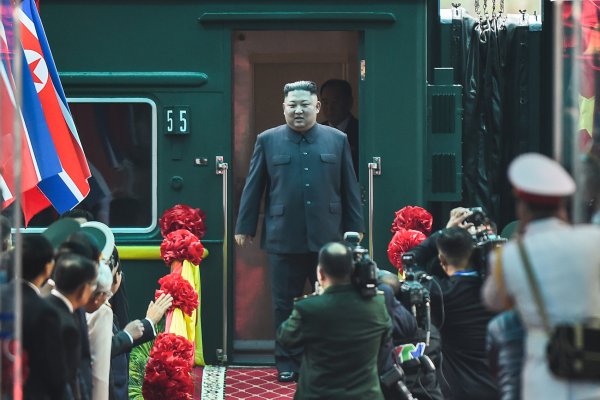 Why Kim Jong Un Took a Train to Vietnam
Next Up: Editor's Pick