The Best, Worst and Most Totally Fine Moments of the 2019 Oscars

Depending on who you asked, anticipation for the 91st Annual Academy Awards was either very high or very low: high for those who wanted to see whether the Academy could pull off the night at all after making an incredible string of missteps in an effort to boost ratings, and low for—well, all the people whose lack of interest explains those low ratings. Now that it’s all said and done, the outcome was… fine. Just fine.

The 2019 Oscars, as it turned out, were neither a trainwreck nor a triumph. The ceremony was not so much a collection of highs and lows as an ongoing barrage of just fine-ness. Professional performers performed professionally with a high degree of competence and humor, consistently on-key. A couple of speeches were boring or awkward, a couple (Olivia Colman!) were delightful and many were, again, fine. Green Book took home the night’s top prize in what did not amount to a particularly transcendent moment, before presenter Julia Roberts stepped in and said, “Well, apparently that wraps up the Academy Awards,” and the night was over.

Here’s a recap of the best, worst and most in-between of the 2019 Oscars.

Best attempt to open the ceremony without a host

An image of the late Freddie Mercury is projected onto a screen while Adam Lambert + Queen perform onstage during the 91st Annual Academy Awards at Dolby Theatre on Feb. 24, 2019.
Kevin Winter—Getty Images

If you can’t have a host give a 15-minute monologue roasting Hollywood for its lack of progress and lightly teasing some megastars in the crowd, you’d better have (we guess?) an arena-worthy rock performance followed by a montage followed by three presenters who probably should have hosted anyway. The 2019 Oscars opened with a medley by the surviving members of Queen and a sequin-y Adam Lambert standing in for frontman Freddie Mercury, the subject of Best Picture nominee Bohemian Rhapsody. The musical numbers played alright in a living room but appeared to have successfully rocked the audience in the room, where stars like Allison Janney and Amy Adams were on their feet, seemingly genuinely into it.

After that performance, there was a montage that basically stood in for the Oscar for Best Popular Film the Academy introduced then briskly did away with last summer, giving movies like A Simple Favor and Crazy Rich Asians their moment. This served to remind viewers that, well, movies came out in 2018.

If the montage was disposable, what came after was vital: The presentation of the Oscar for Best Supporting Actress (to If Beale Street Could Talk‘s Regina King), which was smartly used to have SNL alumnae Maya Rudolph, Amy Poehler and Tina Fey address the gaffes that led up to the ceremony and charm viewers with a little we’re-not-hosting-but-imagine-what-it-would-be-like-if-we-were bit. “We are not your hosts,” said Fey, “but we’re gonna stand here a little too long so that the people who get USA Today tomorrow will think that we hosted.”

Ruth E. Carter and Hannah Beachler won back-to-back Oscars for Costume Design and Production Design, respectively, both for Black Panther. Their wins represented not only the first Oscars ever for Marvel Studios, but the first wins for black people in both categories. The crowd leapt to their feet when Carter’s name was announced—she was previously nominated for her work on Malcolm X and Amistad—and she gave a rousing speech. She touted the power of costume to make women appear as empowered leaders onscreen and pointed to the way her team’s work elevated the story. “Marvel may have created the first black superhero, but through costume design we turned him into an African King,” she said.

Beachler thanked director Ryan Coogler through tears before acknowledging Carter and cinematographer Rachel Morrison “and everything they did behind the camera with me.” The pair of speeches made for a moving moment that recognized the work of black women behind the camera on a historic film, as Jamil Smith put it in a TIME cover story last year, “about what it means to be black in both America and Africa—and, more broadly, in the world.”

Clearest proof that chivalry’s not dead

When Regina King rose from her seat to collect her Academy Award for Best Supporting Actress, her dress became entangled with her shoes. Captain America himself (that’s Chris Evans, to those who don’t speak Marvelese) leapt to his feet to offer a hand and prevent a repeat of Jennifer Lawrence’s infamous trip up the Oscar stairs in 2013. It was the decent thing to do, of course, but a little decency these days goes a long way—toward trending on Twitter, at least.

Alfonso Cuarón impressively, though not altogether surprisingly, gave three speeches on Sunday night for Roma, which he wrote, directed, produced, edited and shot himself. Thankfully for viewers uninterested in hearing the same speech over and over again (everyone)—although not for those who wished he might have broken Patty Duke’s record (two words) for shortest speech ever—Cuarón came prepared with handy quotes and metaphors to keep each one poetic and lively. A true awards season veteran. Roma ultimately won Best Foreign Language Film and Cuarón won Best Director and Best Cinematography—though the film did not take home the Oscar for Best Picture, which many prognosticators expected it would.

As the producers of the Oscars searched for ways to shorten this year’s ceremony, one idea that many people raised was to move the short film categories off of the telecast. If few viewers have seen a good number of the Best Picture nominees, even fewer have watched the shorts by the time of the show, and the filmmakers are almost always unfamiliar names and faces, which don’t exactly draw viewers even if they represent the feature directors of tomorrow.

But this year’s winners and their speeches made a strong argument in favor of continuing to televise them. “I can’t believe a film about menstruation just won an Oscar,” said Rayka Zehtabchi as she accepted the Oscar for Best Documentary Short for Period. End of Sentence, a film executive-produced by six girls from a Los Angeles high school. Just before that, while accepting the Oscar for Best Animated Short for Bao, Domee Shi had a message for girls, too. “To all of the nerdy girls out there who hide behind their sketch books, don’t be afraid to tell your stories to the world. You’re gonna freak people out but you’ll probably connect with them too.” Shi, the first woman to direct a Pixar short, and Zehtabchi are both under 30.

Not only were their speeches exuberant, giddy and gracious—enough of a reason to justify their presence in the big leagues—but they offered examples of women making movies that we just aren’t getting elsewhere on Oscar Sunday.

In their much anticipated performance of “Shallow” from A Star Is Born, Lady Gaga and Bradley Cooper got up close and personal. Cooper sidled up next to Gaga on the piano bench for the final bars of the number, which would go on to win Best Original Song, in a moment made for the meme factory.

Best dig at the 1990 Oscars ceremony

When Spike Lee won the Oscar for Best Adapted Screenplay for BlacKkKlansman, he called it—as can only be expected from Spike Lee—as he sees it. (He also, winning his first Oscar in 30-plus years, got bleeped out when he reportedly instructed the producers not to “turn that motherf-cking clock on.”) He acknowledged that the U.S. was built on the enslavement of Africans and the genocide of Native people. He thanked his grandmother, whose own mother was a slave, and who saved to put her grandson—her “Spikey Poo”—through college and graduate school. He reminded viewers that the 2020 presidential election is fast approaching and made a rejoinder to “make the moral choice between love versus hate” and (drumroll, please), “Let’s do the right thing!”

With this, Lee was referencing his groundbreaking 1989 movie, which was famously snubbed at the Oscars, failing to secure a nomination for Best Picture while Driving Miss Daisy, a movie whose attitude toward race was decidedly more quaint, went home with that big prize. BlacKkKlansman did not win Best Picture at these Oscars—that honor went to a movie about race relations which many critics consider to be decidedly, well, quaint. But at least tonight, three decades later, the filmmaker finally went home with a piece of hardware in hand.

Most surprising, charming, totally lovely and well-deserved moment of the night

Olivia Colman accepts the Actress in a Leading Role award for 'The Favourite' onstage during the 91st Annual Academy Awards at Dolby Theatre on Feb. 24, 2019.
Kevin Winter—Getty Images

Olivia Colman! Won an Oscar! Is what you were probably exclaiming to yourself if you’ve been following along throughout awards season and expecting Glenn Close—who is long overdue to win, this being her seventh nomination—to go home with Best Actress. Yet you couldn’t be faulted if you thought Colman’s performance in The Favourite was among the most layered and profound and adroit you’d seen in some time.

Upon winning and registering even more surprise than anyone following along at home, Colman proceeded to give a genuinely charming, aw-shucks acceptance speech. “It’s genuinely quite stressful,” she began. “This is hilarious!” she continued. She addressed Close: “You’re my idol and this is not how I wanted it to be.” She thanked her children, who she hoped were watching because “this is not gonna happen again.” She blew a raspberry when the teleprompter urged her to wrap up, made the camera focus on her husband just at the moment when he looked like he was going to cry, and finally blurted out, exasperated, “Lady Gaga!” The surprise was the kind that makes the Oscars worth watching. #GlennClose2020? 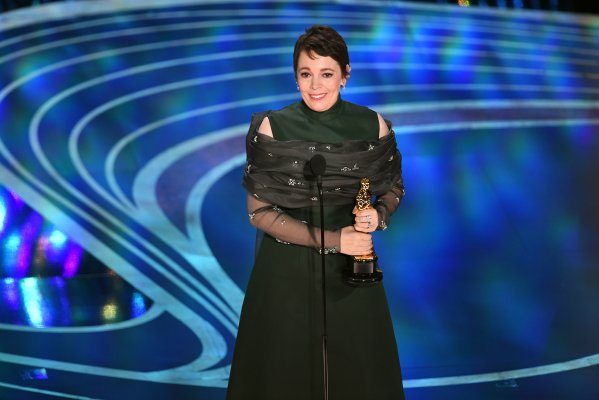 A Shocked Olivia Colman Charmed Everyone at the Oscars With Her Best Actress Speech
Next Up: Editor's Pick