Five people were killed and six injured on Friday after 45-year-old Gary Martin opened fire at the Henry Pratt Co. warehouse in Aurora, Ill. Records reveal that he had a violent past before the shooting.

Officers have not yet revealed Martin’s motive, but confirmed that he was fired from the valve manufacturing warehouse on Friday after working for the company for 15 years.

Court records show that Martin had a history of violence prior to the mass shooting, including domestic battery-related charges.

According to police, Martin was convicted of a felony for aggravated assault in Mississippi in 1995. The Chicago Sun-Times reports that the felony conviction was for stabbing a woman.

Records also show that in 2000, he was cited in Aurora for illegally altering the speakers in his car and for “squealing or screeching tires,” the Sun-Times reported. Additionally in 2002, Martin was sued by his landlord and a Kane County judge entered an order of possession against him, according to the Sun-Times.

According to CBS 2 Chicago, after the shooting, police sent a bomb squad to the Aurora Acorn Woods apartments where Martin lived.

There, neighbors described Martin as a loner who kept to himself.

Neighbor Jennifer White said she only saw Martin when he would spend time outside flying his drone or working on his car.

According to the Chicago Sun–Times, Martin’s mother, who declined to give her name to reporters outside of an Aurora police station, said her son was stressed before the shooting.

“He was way too stressed out,” his mother told reporters as she embraced other relatives.

Aurora police also confirmed that in January 2014, Martin was issued a firearm owner’s identification card after passing a background check.

Police said in March 2014, Martin purchased a Smith & Wesson .40-caliber handgun from an Aurora gun dealer. According to police, he applied for a concealed carry permit five days later, which required a fingerprinting and background check, and was rejected because of the felony conviction.

The Associated Press talked to residents of Aurora, a city of about 200,000, located 40 miles west of Chicago, about how the shooting has affected them.

The AP reports that lifelong Aurora resident Christy Fonseca never expected to receive a phone call from her mother warning her that an active shooter was loose in town.

“In Aurora, period, we’d never thought anything like this would happen,” Fonseca told the AP. 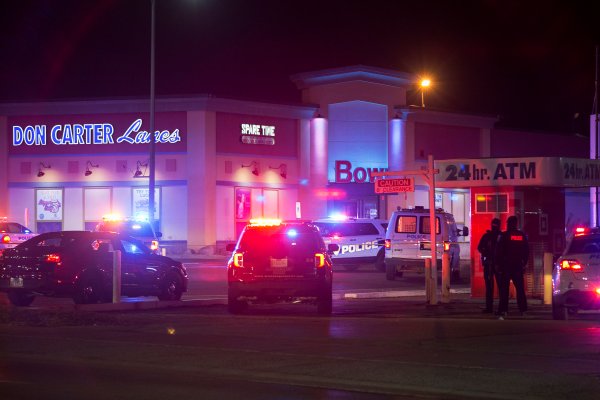