Before she was awarded an honorary Oscar in 2017, it’s hard to say how many average moviegoers—as opposed to fans of French cinema—had ever heard of Agnès Varda. She’s a lot more well-known now, and that’s as it should be. Varda, who died this past March, was the only woman among all those men—Godard, Truffaut, Rivette and others—to carve out a legacy for herself in the French New Wave. Her knockout 1962 feature Cleo from 5 to 7 details two hours in the life of a Parisian chanteuse as she waits for the results of a cancer test: It’s a picture that vibrates with energy, both an existential meditation and an ode to a whole city of lives being lived. Varda, who was born in Belgium but built her career in France, worked steadily in the years since, not just as a filmmaker but as a photographer and installation artist. Her 2017 film, Faces Places (its French title is Visages villages), a documentary made with the portrait artist JR, brought her to a wider, younger audience. And with the vibrant documentary Varda by Agnès—the last film she completed before her death—she both surveys and caps off a long, multitextured career: Varda had said this would be her final film, though there’s nothing melancholy about it. It’s a scrapbook autobiography that’s pure joy to flip through.

Varda by Agnès is built around a series of filmed stage appearances in which Varda—in her signature duotone bowl haircut, deep strawberry red on the bottom and snow-white at the roots—riffs on her life and her approach to filmmaking. As a performer, she’s an enchanting, mischievous presence: When she surveys an audience of young people to find out how many have seen Cleo from 5 to 7, a surprisingly large number of hands shoot up—“A fair few, as they say down south,” she observes, with obvious pleasure. Then she goes on to explain how she went about making that film on the cheap: Confining the story to just two hours of one woman’s life simplified the narrative logistics, and it was shot in an easy-to-navigate arc of Parisian locations. Varda by Agnès is a mini filmmaking class by itself: The subtext is that having unlimited resources won’t result in a masterpiece; it’s working around limitations that proves what an artist is made of.

Varda was, after all, a filmmaker who built a remarkable career from being alive to the people and objects around her, things that other people might not look twice at. In that sense she was, as she herself knew, like the subjects of her marvelous 2000 documentary The Gleaners & I, people who sustain themselves by sifting through food discarded at the market or rejected by farmers, edibles that aren’t always perfect but that can certainly nourish a life. The joy of the hunt counts for something too. Varda explains how, at one point, she found herself yearning to “film close to home”: We see footage of a Parisian neighborhood baker scoring unbaked loaves of bread with a few swift razor strokes, after which he slips the blade between his lips for safekeeping. In the late 1960s, when Varda was living in Los Angeles with her husband, filmmaker Jacques Demy, she flew to Oakland to find out what the Black Panthers were all about. The Panthers, she said, were unfazed by “a little lady with a 16mm camera,” which is how she got the footage for the documentary short she would go on to make.

Just listening to Varda speak is a delight. She was a person who took pleasure in the world of life around her, even in the midst of the curveballs thrown by old age. In her final years Varda suffered from a degenerative eye disease, but even then, with the help of her friend JR, she devised a playful way to show us what it was like to see through her eyes. (It involves a group of people sitting on a set of bleachers, each holding one giant letter of a typical eye chart.) If you’re well versed in Varda’s films, you’ll recognize many of the clips she includes in Varda by Agnès. Even so, it all feels new. You’ll learn a lot from Varda’s narration, about filmmaking, about life, about her. If you want to know how to turn scraps into gold, this is the masterclass for you. 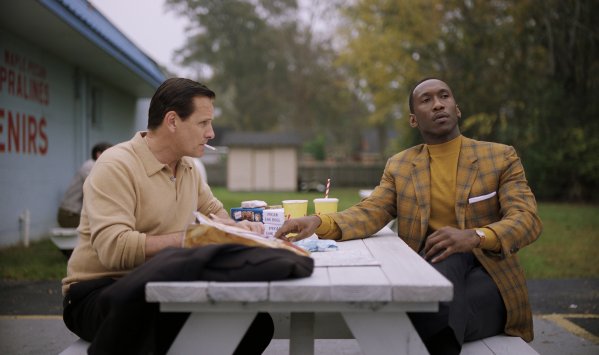 What to Know About the Controversy Surrounding the Movie Green Book
Next Up: Editor's Pick