Stephen Colbert Is Not Impressed With Government in 2019 So Far

Stephen Colbert is pretty fed up with the politics of today. In fact, Colbert doesn’t think anything that’s going on in the White House is all that noteworthy this week, despite plenty of ink being devoted to President Donald Trump‘s latest movements toward appearing to accept a smaller border wall deal.

“I truly believe that years from now people will look back on this day and say, why are we looking back on that day?” Colbert said on his Late Show on Wednesday night, referring to the national conversation around the deal.

But Colbert had even sharper jokes for the latest news about averting another shutdown. “Celebrating that is like celebrating that your child finally used the potty on his first day of medical school,” he said. “It’s not impressive anymore.” As for Trump’s posturing as decides whether or not he’s signing the latest deal? “It’s just Kabuki Theater… He’s got to do the dance to get to yes, which is a refreshing change from his usual MO, the grope to get past no,” Colbert joked. 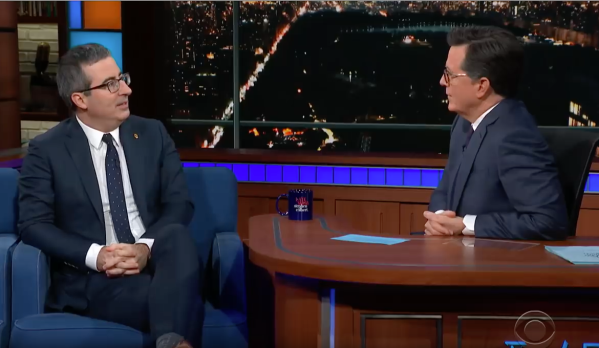 Audience Chides John Oliver for Suggesting That Trump Could Be Re-Elected on Stephen Colbert
Next Up: Editor's Pick