Journalist Maria Ressa Arrested for 'Cyber Libel' in the Philippines

Journalist Maria Ressa, founder of the news website Rappler, was arrested Wednesday in the Philippines on charges of “cyber libel” that are widely seen as a crackdown on the site’s reporting.

The charges were filed by the Philippine Department of Justice over a May 2012 story about businessman Wilfredo Keng and his alleged links to illegal drugs and human trafficking. The Cybercrime Prevention Act — a controversial law that prompted fears of censorship because it made online libel a crime punishable by up to 12 years in jail — was enacted months later in September 2012.

Rappler has covered the violent drug war of Philippine President Rodrigo Duterte, who has banned Rappler from covering presidential events and called the site “fake news.”

Ressa appeared on one of the covers of TIME’s 2018 Person of the Year issue in December, along with three other journalists and one news organization.

In an interview with TIME last week, Ressa called the new charges against her “laughable.” Human rights organizations have also condemned the Philippine government for a “chilling campaign of repression, obstruction and intimidation.”

“It is part of the same government effort to try to make Rappler toe the line, which is, ‘You shouldn’t be reporting on the drug war. You should be reporting how wonderful our country is today.’ It is just not what we do,” Ressa told TIME last week. “I want to face this — because the more ludicrous the cases are, the clearer it is that these are tools that are being used to try to silence us.”

She also faces charges of tax evasion that carry a sentence of up to 10 years in prison if convicted. Duterte’s spokesperson has previously denied that those charges were politically motivated.

“The Philippine government’s legal harassment of Rappler and Ressa has now reached a critical and alarming juncture,” Shawn Crispin, senior Southeast Asia representative for the Committee to Protect Journalists, said in a statement. “We call on Filipino authorities to immediately release Ressa, drop this spurious cyber libel charge, and cease and desist this campaign of intimidation aimed at silencing Rappler.” 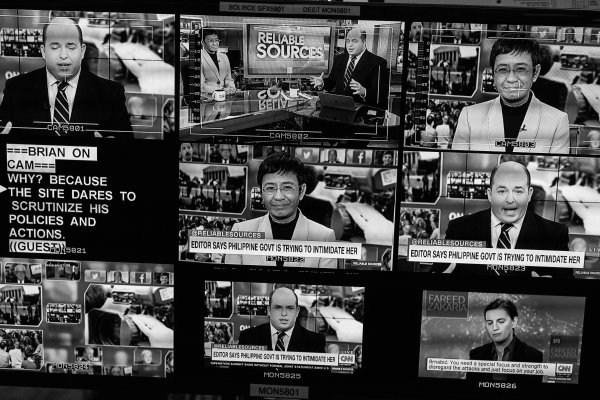