On Feb. 24, the 91st Academy Awards will cap off a strange and contentious season, during which squabbles about the ceremony itself at times distracted from the movies, performers and craftspeople actually up for awards. As the 2019 Oscars approach, it’s time to make final predictions as to who will take home the trophies. Could Marvel make a play for Best Picture with Black Panther? Does Glenn Close, after leaving six previous Oscars ceremonies empty-handed, finally have one in the bag? As 2017’s historic Moonlight win proved, nothing’s sealed until the credits roll, but that doesn’t stop us from placing our bets.

Here are TIME’s predictions for top categories at the 2019 Oscars.

If you look at the movies recognized by the various professional guilds in Hollywood—Black Panther (Screen Actors Guild), Green Book (Producers Guild), Roma (Directors Guild), Bohemian Rhapsody (dramatic) and The Favourite (comedic)(American Cinema Editors)—it’s pretty clear that there’s no consensus pick for Best Picture this year. (The Writers Guild winners, Eighth Grade for Original Screenplay and Can You Ever Forgive Me? for Adapted, aren’t even present in this year’s field of nominees.) But of the two movies that have risen to the top, Green Book and Roma, we’re betting on Alfonso Cuarón’s personal story over Peter Farrelly’s feel-good but contentious dramedy. It would be really something for a black-and-white, Spanish-language Netflix movie to take home Best Picture, but this one has the momentum to do it.

Read More: The Real History Behind the Movie Roma

Jonathan Pryce, who plays Close’s famous novelist spouse in The Wife, says the actor “scared the bejesus out of me in Fatal Attraction”
Graeme Hunter Pictures

Yalitza Aparicio, Roma Glenn Close, The Wife Olivia Colman, The Favourite Lady Gaga, A Star Is Born Melissa McCarthy, Can You Ever Forgive Me?

There was a time, back in October, when it looked like this one might belong to Gaga. And then, when Olivia Colman charmed the audience at the Golden Globes and again, more recently, at the BAFTAs, it seemed like the British actor might finally get her long overdue international recognition. But no one is more overdue than Glenn Close, who has been nominated for six Academy Awards before this go-around and never won. Close set her now unstoppable train in motion with a heartfelt Golden Globes speech that compared her mother’s unsung story to that of her character in The Wife, and it’s highly probable that Academy voters want to see her onstage Sunday night to put the finishing touches on this narrative.

Read More: Glenn Close Is One Step Closer to an Oscar With The Wife

Rami Malek has taken home a Golden Globe, a SAG award and a BAFTA for his portrayal of Freddie Mercury. In the meantime, Bradley Cooper’s awards season momentum has all but come to a halt, Viggo Mortensen put his foot in his mouth and Christian Bale never really picked up steam after winning the Globe for Best Actor in a Comedy or Musical. (Willem Dafoe, though a happy surprise in this category, has never been a frontrunner.) Especially after Malek finally addressed the Bryan Singer controversy—about which the Bohemian Rhapsody team’s silence was beginning to become deafening—Malek is poised to win.

King shines as Tish’s mother, who is dedicated to helping the couple
Annapurna Pictures

Supporting Actress is an interesting category this year: This marks Amy Adams’ sixth nomination (#JusticeforAmyAdams is a sentiment shared by many on Twitter). Roma‘s Marina de Tavira was one of the biggest surprises the day the nominations were announced. Weisz got a boost when she won a BAFTA earlier this month. And Regina King was shut out of the SAGs entirely. But King, who started the season with the majority of critics associations’ awards and took home the Globe, still feels like a lock for her portrayal of a fiercely loving mother in Barry Jenkins’ adaptation of James Baldwin’s Beale Street. Her win is also a nice way for the Academy to recognize the film, which didn’t make the cut in the Best Picture field despite being an acclaimed and moving follow-up to Jenkins’ 2017 Best Picture winner Moonlight.

If there’s anyone who could pull out a surprise win for Supporting Actor, it’s Richard E. Grant, who has proven as charming throughout awards season as his character in Can You Ever Forgive Me? is (minus the ethically dubious hustling). Although his performance has been almost universally lauded, Mahershala Ali has been relatively quiet on the Oscars campaign trail, in the face of conversations about Green Book‘s authenticity and criticism of its attitude toward racism. But it looks like Ali is going to win his second Oscar in the space of three years, a repeat victory that would be the fastest since Tom Hanks won back-to-back Best Actor Oscars for Philadelphia and Forrest Gump in the mid-1990s.

Read More: The Movie Green Book Is Named for a Real Guide to Travel in a Segregated World. Its Real History Offers a Key Lesson for Today

If you are putting money on this category, the oddsmakers will tell you to put it on Alfonso Cuarón, who won the award five years ago for Gravity. Cuarón won Best Director for Roma at the Golden Globes and the Directors Guild of America awards, and the film is a frontrunner in several categories. But don’t discount the possibility of a surprise upset by Spike Lee, who’s nominated in this category for the first time ever and for whom a win would be, to many, a kind of vindication.

The Ballad of Buster Scruggs BlacKkKlansman Can You Ever Forgive Me? If Beale Street Could Talk A Star Is Born

But if you’d prefer not to hold your breath for Lee in the Best Director field, look for him and his co-writers in the Adapted Screenplay category instead. Though Can You Ever Forgive Me? took home top honors in this category from the Writers Guild of America, the entire Academy votes on awards (not just specific branches), and Lee’s adaptation of Ron Stallworth’s memoir about infiltrating a chapter of the Ku Klux Klan in Colorado in 1979 appears to have more weight behind it as the final deadline for voting arrives.

It’s quite possible that Green Book‘s more easygoing, crowd-pleasing (to a point) sensibility will win over voters here. But we’ll bet on The Favourite‘s acerbic, witty take on the power dynamic between Queen Anne and the two companions jockeying for her favor. All three actors were nominated for Oscars but it’s more likely we’ll see the award go to the writers who put the words in their mouths.

Read More: The Favourite Is a Wicket Delight Filled With Marvelous Performances

Miles Morales is voiced by Shameik Moore in "Spider-Man: Into the Spider-Verse"
Sony

Incredibles 2 Isle of Dogs Mirai Ralph Breaks the Internet Spider-Man: Into the Spider-Verse

Pixar has a very good, if not spotless, track record in this category, which was first handed out in 2002. But the animation studio is unlikely to follow up The Incredibles‘ 2005 win with one for its sequel. Instead, look for some fresh energy inserted into the field when Spider-Man: Into the Spider-Verse takes home a little gold man for bringing something new not just to the well-worn Spidey suit, but to animation itself.

There’s more attention on the Oscar for Best Cinematography this year than there has been in some time, thanks largely to the now-reversed decision to hand out the award during a commercial break. It’s also an unusually international year for the field, with three foreign-language films in the mix. But expect this one to go to Cuarón, who tapped himself as director of photography for Roma when his usual collaborator, Emmanuel Lubezki, was unavailable.

RBG, one of this summer’s knockout documentaries, chronicles the adventures of another kind of superhero: Justice Ruth Bader Ginsburg
Magnolia Pictures

Free Solo Hale County This Morning, This Evening Minding the Gap Of Fathers and Sons RBG

Expect this one to be a toss-up between the free-climbing nail-biter Free Solo and Ruth Bader Ginsburg picture RBG. Though it’s a more conventional documentary, RBG might just eke out a win, thanks to the statement it allows Academy voters to make following a tumultuous few months for the Supreme Court.

Behind the scenes of ROMA by director Alfonso Cuarón.
Carlos Somonte—Netflix

The only scenario in which Roma doesn’t win this award is the one in which voters feel they’ve given it enough love for its directing, cinematography and overall achievement in the Best Picture field and make some room for the much lauded Cold War. But it’s hard to imagine a film that’s nominated in 10 categories not winning the one which, in less inclusive years past, might have been its only shot.

Nicholas Britell’s gorgeous, emotional soundtrack to If Beale Street Could Talk is central to the film’s ability to communicate its story of a pure and resilient love. It’s even been, according to one Twitter user, the soundtrack to one baby’s entrance into the world. The biggest threat is probably Black Panther, but look for Britell, who was also nominated in 2017 for Moonlight, to take home his first Oscar.

Early in the season, prognosticators thought A Star Is Born might sweep Oscar Sunday as easily as Jackson Maine swept Ally out of a drag bar and onto the big stage. But the only category in which it’s likely to win—and extremely likely, at that—is this one. A win for Lady Gaga, Mark Ronson, Anthony Rossomando, Andrew Wyatt and Benjamin Rice might be the surest bet of the night—even though “Always Remember Us This Way” is the movie’s true unsung hit.

Read More: How A Star Is Born‘s Music Hit the Sweet Spot 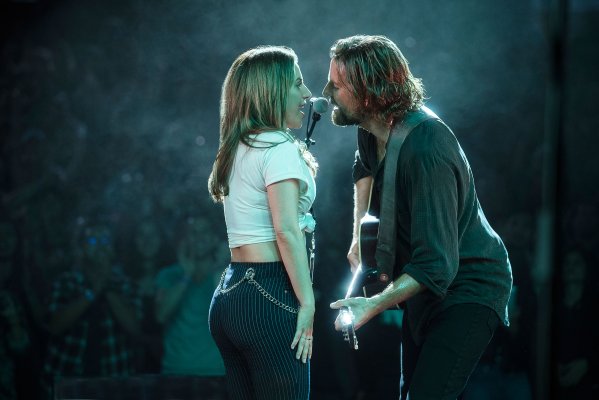