Kicking off her presidential campaign over the weekend, Massachusetts Sen. Elizabeth Warren said that President Donald Trump “may not even be a free person” by next year.

“By the time we get to 2020, Donald Trump may not even be President,” the Democrat said during a campaign rally in Cedar Rapids, Iowa on Sunday, CNN reports, one day after she formally declared her candidacy for the Democratic presidential nomination. “In fact, he may not even be a free person.”

Asked by reporters to expand on her comments, Warren said: “Well, come on. How many investigations are there now? It’s no longer just the Mueller investigation. They’re everywhere and these are serious investigations, so we’ll see what happens.”

As well as special counsel Robert Mueller’s ongoing investigation into Russian meddling in the 2016 election, President Trump faces a probe by the House intelligence committee of his inaugural committee over illegal foreign donations, as well as inquiries into practices at the Trump Organization.

Warren, who announced the formation of her exploratory committee on New Year’s Eve, had until this weekend largely avoided addressing the President by name in her campaign, despite high-profile disputes with him on social media. She has also said that the Democrats’ 2020 presidential campaigns should not focus on unseating Trump.

“Donald Trump is not the only problem we’ve got. Donald Trump is the symptom of a badly broken system,” she said. “So, our job as we start rolling into the next election is not just to respond on a daily basis. It’s to talk about what we understand is broken in this country, talk about what needs to be done to change it.” 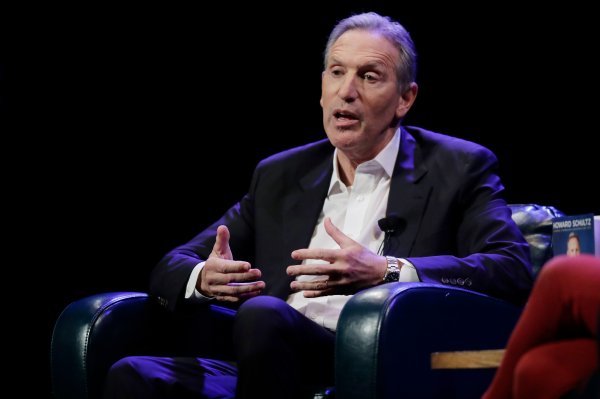 Howard Schultz Just Had His Own 'Please Clap' Moment
Next Up: Editor's Pick