If there was one thing that almost everyone watching Super Bowl 53 probably agreed on, it was that chunky milk was not their cup of tea.

After a Mint Mobile commercial aired in which a family was shown enjoying a carton of “chunky-style milk,” some viewers took to social media to express their distaste for the prospect of lumps in their liquid dairy products. In the ad, one potential Mint Mobile customer just can’t seem to wrap his head around the idea of a $20-a-month wireless internet deal.

“It’s actually the third ad in a series that we’re calling, ‘That’s Not Right,'” Aron North, senior vice president of marketing and creative for Mint Mobile, told TIME. “Our first spot was around finger dipping, the second spot was around carpeted showers and the third one, obviously, chunky-style milk…We fully agree that chunky-style milk is not right. But it is a humorous way to bring to light the truth, which is a price so good and a product so good that it’s hard to understand and it’s hard to get your mind around it.”

“Everyone involved in the chunky milk commercial should be burned alive,” one staunch opponent tweeted in response to the controversial spot.

“Show me people drinking chunky milk and I’ll show you me not buying your product ever,” added another.

But while the ad may have garnered a more visceral response from viewers than North says Mint Mobile expected, the company is standing by its tactics.

“We expected a reaction. I think this strong of a reaction maybe not. But the Super Bowl is a place where I feel like creativity or pushing the envelope is recognized by the audience and you’ve got to do something to really help yourself stand out,” he explained. “If it took something as obtuse as chunky-style milk to wake everybody up, I would run it again.”

See some other responses below. 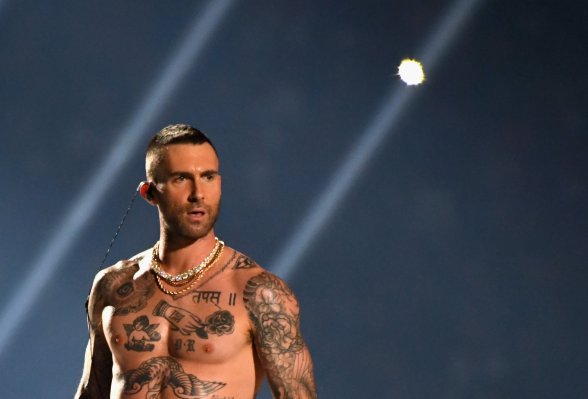 Here's the Full Breakdown of the Extensive Tattoo Landscape Covering Adam Levine
Next Up: Editor's Pick