The original ‘Fiji water girl’ did not attend the Screen Actors Guild (SAG) Awards on Sunday, but you might’ve done a double take from her colleagues on the red carpet.

Though it wasn’t by Kelleth Cuthbert, the Canadian actress and model who went viral for serving Fiji water bottles while photobombing the stars at the Golden Globes, stars were again quenched by the brand’s bottles—and served by models in blue dresses.

When Cuthbert appeared at the 2019 Golden Globes, the internet fell in love with the way she stole the show. Her Instagram followers increased by more than 256 percent in the days following the awards show, and she has since booked an acting gig on the soap opera The Bold and the Beautiful.

These new Fiji faces are less likely to go viral, though. The models seemed to stand a bit further from the stars at the SAG Awards, leading the night to end with no hilarious photobombs—the marketing tactics were not embraced by all. “The sponsors of events need to get permission from people when they get them to take their picture next to products,” Jamie Lee Curtis wrote in a post voicing her criticism.

Fiji would have had to spend $12 million for the same level of brand exposure in traditional advertising, Apex Marketing Group estimated.

Though the internet only recently discovered the Fiji water girls, the brand has been using models on red carpets during awards season for years. 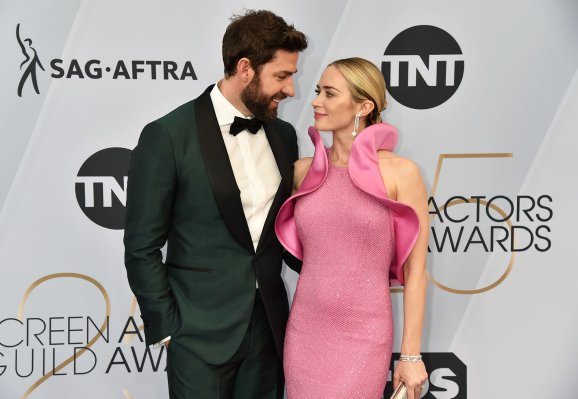 Here's the Emily Blunt Speech That Made John Krasinski Get All Misty Eyed
Next Up: Editor's Pick