This Roma Actor Says He Has Been Denied a U.S. Visa Three Times. Now, He Might Miss the Oscars

Roma, Alfonso Cuarón’s semi-autobiographical Netflix drama, is dominating this year’s awards season. Earlier this week, the movie, which tells the story of a housekeeper employed by a middle-class family in Mexico City in the 1970s, was nominated for 10 Oscars including Best Picture. But one actor has been conspicuously absent from the press tour. Jorge Antonio Guerrero, who plays Fermín—a love interest of Yalitza Aparicio’s protagonist Cleo—is still in his home country of Mexico, unable to get a visa to visit the U.S. Now, it looks like he might miss the Feb. 24 Academy Awards ceremony altogether.

Guerrero told Mexican publication Quién that he has made three attempts to obtain a travel visa to visit the U.S., all to no avail. His two latest applications were made after the release of Roma. (The first was to visit the U.S. as a tourist.) In one recent attempt, Guerrero says he presented the U.S. Embassy in Mexico with a letter from a producer inviting him to the U.S. for Roma press events and screenings. But his efforts were denied. “[The embassy] did not want to read [the letter],” he told Quién in Spanish.

In a subsequent attempt, Guerrero says the agents who interviewed him denied the application because of complications surrounding whether or not the trip was for work-related purposes. When he explained that he would be a guest at the U.S. events, he was again rejected.

A representative for Netflix told TIME over email that the streaming service had also provided letters of support to assist in Guerrero’s visits to the embassy. Netflix is still looking for a way to get Guerrero to the U.S. for the Oscars, the representative said.

Though Guerrero’s most recent attempts occurred during President Trump’s ongoing partial government shutdown, the U.S. Embassy in Mexico is still functioning, according to its website. “At this time, the U.S. Embassy and Consulates in Mexico will continue to provide routine and emergency consular services during the lapse in appropriations resulting in a partial federal government shutdown,” the website says.

This is not the first time an Academy Awards honoree has faced obstacles related to United States immigration policy. Leading up to the 2017 Oscars ceremony, it was unclear whether Asghar Farhadi, the Iranian director of Best Foreign Language Film nominee The Salesman, would be permitted to travel to the States to attend. President Trump’s travel ban, a January 2017 executive order, suspended the entry of citizens from Muslim-majority nations, including Iran, to the U.S. But rather than embarking on the potentially fruitless visa application process, Farhadi chose not to attend the event in protest, and released a statement that laid out his reasoning. “Dividing the world into the us and the enemy categories creates fear, a deceitful justification for regression and war,” he said. The Salesman won the Oscar in Farhadi’s absence.

Guerrero still hopes he’ll be able to make it to the awards show. But overall, he says he’s happy with the film’s success—and he’s proud of his friend, Aparicio, who is nominated for the Actress in a Leading Role award. “I hope, and I say it with all my heart, Yalitza takes the Oscar,” he told Quién.

The original version of this story misstated the timing of Jorge Guerrero’s applications for a U.S. visa. He applied once prior to the release of Roma and twice after the movie’s release. 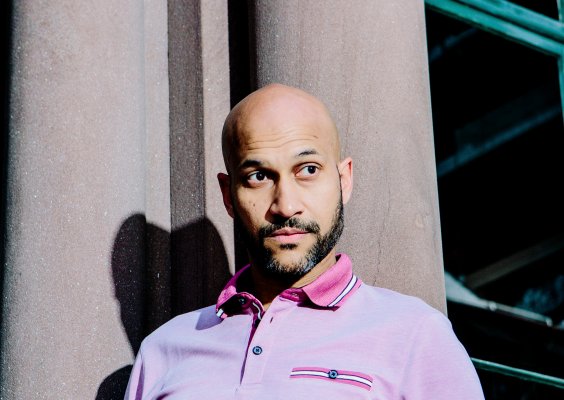 Actor Keegan-Michael Key Is Veering Off a Funny Path—Just As He Imagined
Next Up: Editor's Pick