The name Ruth Bader Ginsburg became almost synonymous with strength and stamina as she rose to prominence in judicial and feminist circles throughout her long career. Famously nicknamed the Notorious RBG and known for her grueling fitness regimen, the late Supreme Court justice also struggled with cancer and other health issues for the better part of her time on the bench — culminating with her death on Sept. 18 at the age of 87 of complications from metastatic pancreatic cancer.

Ginsburg’s health issues became public in 1999, six years after her appointment to the Supreme Court, when she had surgery for early-stage colon cancer. Ten years later, she went through the same process for pancreatic cancer. And nearly a decade after that, the Supreme Court announced that Ginsburg had undergone surgery to have two cancerous growths removed from her left lung. She announced in July 2020 that she’d been treated earlier that year for cancerous lesions on her liver, but made clear her intentions to remain on the bench, noting that she was “satisfied that my treatment course is now clear.”

Ginsburg also had heart stent surgery in 2014 and multiple falls that resulted in broken or fractured ribs. During the spring and summer of 2020, while in treatment for liver cancer, she was also hospitalized for a gall bladder condition and a bile-duct repair. Throughout it all, she was adamant about keeping her medical issues separate from her judicial duties. She did not miss a single oral argument until her 2018 lung surgery, and even then worked from her New York City hospital bed as she recuperated. She rarely referred to her health struggles as more than “a challenge,” as she did in a 2015 MSNBC interview. She was always eager to return both to the bench and to the gym after treatment.

“I have often said I would remain a member of the court as long as I can do the job full steam. I remain fully able to do that,” she said in July 2020.

When it came to treating her cancer, the justice said she followed the advice of former colleague Sandra Day O’Connor — who returned to work at the Supreme Court just nine days after her breast cancer diagnosis.

“She said when you’re up to chemotherapy, you do it on Friday, Friday afternoon. You’ll get over it over the weekend, and you’ll be able to come to the court on Monday,” Ginsburg told a group of law students in 2009. “So I’ve been following her advice meticulously.”

Ginsburg also routinely brushed off concerns about her health, and dismissed critics who said she should retire. Perhaps the most memorable example came in 2009, when she attended a televised speech by then-President Barack Obama while recovering from pancreatic cancer. The justice said she made the appearance partially to remind the American public that women sat on the Supreme Court bench, but noted that it was also an effort to prove wrong then-Kentucky Sen. Jim Bunning, who had made derogatory comments about her health. “I also wanted them to see I was alive and well, contrary to that senator who said I’d be dead within nine months,” Ginsburg said at the time.

In 2018 — at the age of 85 — Ginsburg said she planned to remain on the bench for “at least five more years.” Following more than two decades of struggling with cancer, the Supreme Court justice died in Sept. 2020 of complications from metastatic pancreatic cancer.

Ginsburg’s life was affected not just by her own cancer, but by those of her mother and beloved husband, Marty. The disease claimed both of their lives.

Everyone with cancer experiences the disease differently, and it’s hard to predict how someone will move on after a diagnosis, says Dr. David Ryan, chief of hematology and oncology at Massachusetts General Hospital and author of Living With Cancer. But the illness almost always takes a lasting toll. (Ryan was never involved in Ginsburg’s care.)

“There’s always a before and after,” Ryan says. “You beat cancer, but many people have lifelong scars, both physical and emotional.”

Sometimes, Ryan says, cancer recommits people to their careers and passions — as appeared to be the case with Ginsburg — while other times it sparks a dramatic life change.

“People who’ve had cancer are acutely aware that [life] could always be taken away from them,” he says. “You’re always waiting for the other shoe to drop in a way that people who haven’t had cancer can ignore.”

This may be especially true, he says, of people who have recurrent disease, since a cycle of relapse and remission can be highly stressful. But Ryan says that some people who experience multiple bouts of cancer develop resilience.

“It gets harder for a second diagnosis or a third diagnosis, but you also have a calmness. They’ve been through it before, they know what dealing with the hospital is — all this stuff that makes you crazy the first time,” Ryan says. “I would never underestimate the human [ability] to be resilient.”

Ginsburg is a prime example of that resilience. If she felt the burden of cancer treatment and recovery, she rarely let on — nor did she let it stop her from building a lasting legacy in the judicial world.

“[I would like to be remembered as] someone who used whatever talent she had to do her work to the very best of her ability,” Ginsburg told MSNBC in 2015. “And to help repair tears in her society, to make things a little better through the use of whatever ability she has. To do something, as my colleague David Souter would say, outside myself. ‘Cause I’ve gotten much more satisfaction for the things that I’ve done for which I was not paid.” 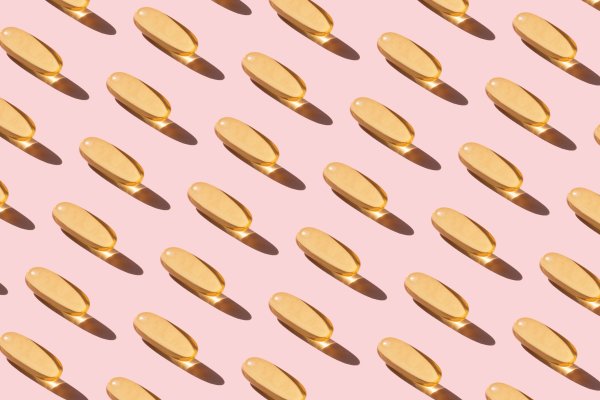 There's No Evidence That Vitamin-D Prevents Coronavirus
Next Up: Editor's Pick