When a chyron has an error, people usually cringe.

It went down a little differently, though, when Jameela Jamil’s name was spelled wrong on E! News during the red carpet show before the 76th annual Golden Globes.

In place of The Good Place star’s name, the network referenced a plot point from the show—that Jamil’s character, Tahani, is always outshined by her sister, Kamilah Al-Jamil.

Twitter users watching the 2019 Golden Globes quickly noticed the “mistake” and were thrilled at the hilarious choice. Based on the network’s reaction, it’s safe to say this was not a typo.

Jamil herself was more than a good sport about the misnaming at the Globes. “This is legit the funniest thing I have ever seen,” the actress tweeted. “Tahani would DIE!”

Clearly, Jamil knows how to enjoy her life. She even posted a video on Twitter before her appearance on the red carpet to reveal she was wearing jeans underneath her Monique Lhuillier gown because it was “forking cold.” Los Angeles is experiencing a cold spell, after all.

Whether E! knew what it was doing or not, the situation made some The Good Place fans a little happier, even though the show lost in both of its nominations. 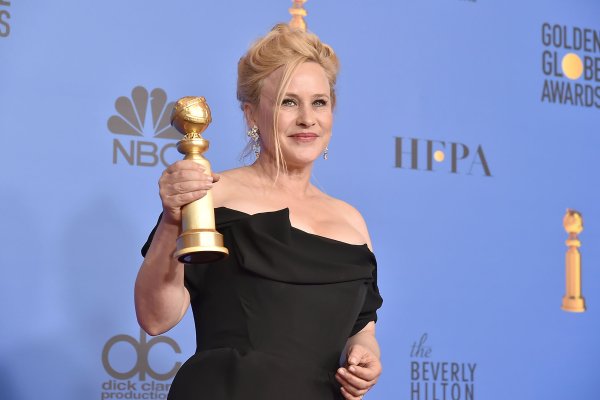 Patricia Arquette Wants to Take Back Her Awards Speech Curse
Next Up: Editor's Pick