President Donald Trump said that the U.S. and North Korea were in negotiations over a second top-level diplomatic summit, and that a location for the event would be announced “in the not too distant future.”

Speaking at the White House Sunday, Trump said the two countries were engaged in “a good dialogue” and that he had “indirectly spoken” with North Korean leader Kim Jong Un, the BBC reports.

Trump and Kim met in Singapore in June last year for a highly anticipated summit, the first such meeting between the leaders of the two countries. The two leaders agreed to a vague framework that included the “complete denuclearization of the Korean Peninsula” and security assurances from the U.S.

But Pyongyang has made little headway winding down its weapons programs since then, and has undertaken efforts to expand some missile testing facilities. Last month, North Korea said it would never “unilaterally” abandon its nuclear weapons unless the U.S. first withdrew military threats and “unjust sanctions” to avoid falling into a “defenseless state.”

In an annual New Year’s address, Kim said he remained open to cooperating with the U.S. on working toward peace. But he also warned that North Korea would diverge from prior agreements if the U.S. “continues to break its promises… and pushes ahead with sanctions and pressure.”

At a Cabinet meeting last week, Trump said he received a “great letter” from Kim. But the letter’s contents have not been made public, and Trump also remarked that he was “not in any rush” to hold a second summit. The White House has repeatedly hinted at a future second summit since June. 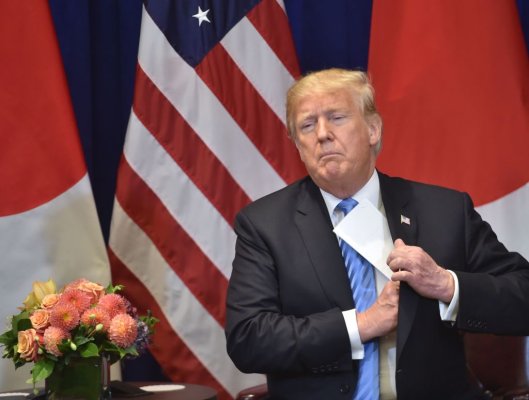 Trump Says Kim Jong Un Sent Him Another Letter
Next Up: Editor's Pick