The Supreme Court announced Friday that Justice Ruth Bader Ginsburg, 85, had two cancerous nodules removed from her left lung. There is “no evidence of any remaining disease,” and Ginsburg, a pancreatic cancer survivor, is recovering well after a pulmonary lobectomy at Memorial Sloan Kettering Cancer Center in New York City, the Supreme Court said.

What does Ginsburg’s diagnosis mean? Here’s what lung nodules are, and what to know about them.

What is a lung nodule?

The term “pulmonary nodule” refers to a round or ovular growth on the lung that is three centimeters in diameter or smaller; a growth larger than that is considered a pulmonary mass, according to the Cleveland Clinic, and is more likely to be cancerous. More than 90% of nodules that are less than two centimeters in diameter turn out to be benign, the Cleveland Clinic says.

While Ginsburg’s nodules were found to be malignant, or cancerous, her surgeon said they were removed successfully, and that pre-operative scans “indicated no evidence of disease elsewhere in the body,” according to the Supreme Court’s statement.

Your likelihood of developing cancerous nodules can also be increased by well-known risk factors for lung cancer — including smoking, asbestos exposure and family history, the American Thoracic Society says. But these growths can also form due to inflammation or scar tissue related to other infections or diseases, the Cleveland Clinic says.

What are the symptoms of lung nodules?

Pulmonary nodules are typically too small to cause any symptoms, according to the ATS. In fact, they’re usually found during routine medical care such as chest x-rays or CAT scans, rather than through a purposeful search. In Ginsburg’s case, the Supreme Court says, the growths were discovered when she was undergoing care for rib fractures following a fall in November.

How serious are lung nodules?

Benign lung nodules don’t usually require any treatment, though doctors may opt to treat the underlying infection or disease that caused them. Even cancerous lung nodules tend to be early-stage, the American Thoracic Society says, meaning they’re quite treatable if caught quickly. In patients whose cancer does not appear to have spread — like Ginsburg — nodules can be safely removed surgically.

The University of Rochester Medical Center estimates that half of all patients with a cancerous lung nodule live at least five years after diagnosis, and 80% of those with nodules smaller than a centimeter in diameter live for longer than five years.

While the Supreme Court did not release information about the size of Ginsburg’s nodules, it did say that no further treatment is planned — suggesting that Ginsburg’s outlook is favorable. Just this summer, the famously fit 85-year-old Justice spoke optimistically about her continuing tenure on the court, saying she expects to serve for at least five more years. 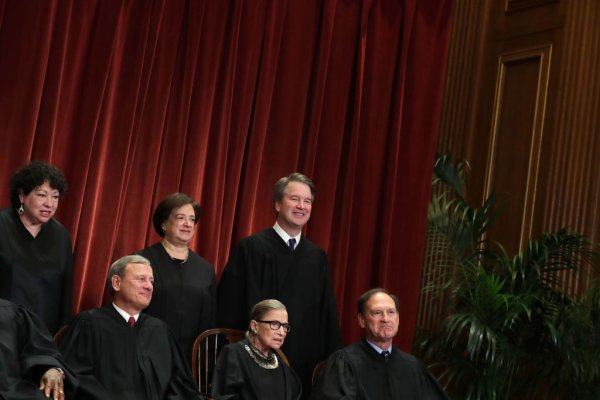 How Justice Kavanaugh Handled His First Abortion Test
Next Up: Editor's Pick