President Donald Trump’s Saturday morning announcement that Interior Secretary Ryan Zinke will step down by the end of the year was hardly unexpected.

Even though controversy has plagued many current and former members of the Trump administration, Zinke stands out due to the diversity of the criticisms and scandals that have followed him. He’s come under fire for everything from plans to install $139,000 doors in his office to his efforts to weaken protections of a rare bird.

Over the last few months, however, reports emerged that even the White House was beginning to rethink Zinke’s ongoing place within the administration. The Washington Post reported that Trump has become concerned about a Department of Justice inquiry into Zinke’s conduct. Additionally, as control of the Congress is set to flip in January, Democrat lawmakers had already promised to investigate the beleaguered Cabinet member.

Here’s what you need to know about the latest accusations against Zinke— as well as the other times he’s come under fire during his troubled 21-month tenure.

In June, Politico reported that Zinke and his wife were involved in a real estate deal in Zinke’s hometown of Whitefish, Mont., which was backed by David Lesar, the chairman of oil company Halliburton.

Under the deal, a developer backed by Lesar could build a parking lot on land owned by a foundation started by Zinke (and where his wife currently serves as President). The potential development would include a business and retail park, and also drive up the value of Zinke’s lands nearby, Politico reported.

While the Interior Department is not involved in the development, the connection to Halliburton raised eyebrows because the company would benefit from Department of Interior plans to open federal lands and waters for oil exploration, as well as from the Interior’s plans to relax drilling standards.

The Department of Interior’s inspector general referred the inquiry to the Justice Department in October. A White House official confirmed to the Post that the investigation was intended to determine whether Zinke had “used his office to help himself.”

Zinke vaguely denied the accusations against him in a tweet announcing his resignation Saturday. He wrote that although he was proud of his accomplishments while in office, “I cannot justify spending thousands of dollars defending myself against false allegations.”

The Associated Press reported in December 2017 that Zinke had taken three unnecessary helicopter rides worth $53,000, including one to take a horseback ride with the vice President.

On Twitter, Zinke described the report on his helicopter usage as “total fabrications and a wild departure from reality,” arguing that the rides had been related to his position.

The office of the Department of the Interior’s inspector general also investigated Zinke’s use of military and chartered planes. It released a report in April that said that while most of Zinke’s flights mainly followed departmental rules, a $12,375 flight he took in June 2017 “could have been avoided.”

Zinke has also come under fire for weakening conservational protections of wildlife and American lands.

On Trump’s orders, Zinke’s department reviewed the boundaries of 27 national monuments in 2017 and suggested that the administration move the boundaries of several monuments. In December, Trump shrunk the size of the Bear Ears National Monument by 85% and halved the Grand Staircase-Escalante, removing federal protections on 2 million acres of land, according to the New York Times.

Zinke has strongly advocated for expanding American offshore drilling including off the coast of Alaska and in the Gulf of Mexico. While it later became clear that the Trump administration had decided to pare down its proposal, the Interior Department initially indicated that it intended to open almost all American waters for drilling.

These changes included a proposal to weaken the Endangered Species Act, a 1973 law intended to protect plants and animals in danger of extinction. Under the proposed changes, animals listed as “threatened” would no longer receive protections similar to endangered animals. A rule which instructs the U.S. Fish and Wildlife Service and National Oceanic and Atmospheric Administration to ignore the economic impact of protecting animals would also be struck from the act.

He also revoked a ban on hunters using lead bullets on wildlife refuges. Environmentalists argue that lead can poison water, the land and the animals exposed to it. 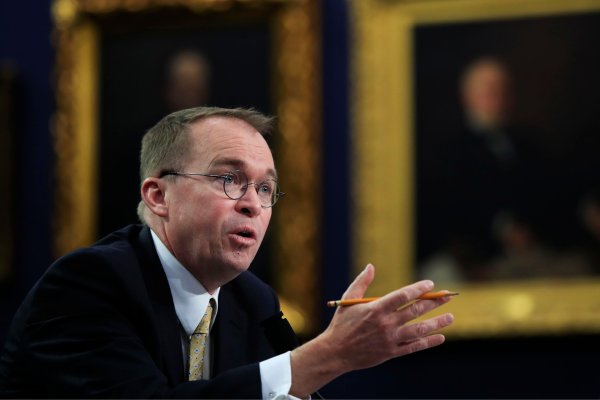 Mick Mulvaney Gets the Most Difficult Job In Washington
Next Up: Editor's Pick