By Jamie Ducharme and Mahita Gajanan

George H.W. Bush was remembered as a “great and noble man” by his eldest son, former president George W. Bush, who choked back tears while eulogizing the 41st president during his state funeral at the Washington National Cathedral.

“So through our tears, let us know the blessings of knowing and loving you, a great and noble man, the best father a son or daughter could have,” Bush said, his eyes shining with tears.

Bush said his father, who died Nov. 30 at the age of 94, showed him what it meant to be a good president, commending his diplomatic skills and courage as a leader. He was also an example of a great family patriarch, he said.

“We tested his patience. I know I did,” Bush said. “But he always responded with the great gift of unconditional love.”

George H.W. Bush was memorialized by other former leaders, colleagues and family at the funeral service on Wednesday. His casket left Washington that afternoon and was flown to Texas, where Bush will be buried next to his wife and daughter Robin in College Station on Thursday.

Presidential historian and Bush biographer Jon Meacham delivered the first eulogy in the funeral, remembering the former president’s life and career with anecdotes and jokes.

“He governed with virtues that most closely resembled those of Washington and of Adams, of T.R. and F.D.R., or Truman and of Eisenhower,” said Meacham, who also spoke at the funeral of former First Lady Barbara Bush earlier this year. “Of men who believed in causes larger than themselves.”

“I believe it will be said that no occupant of the Oval Office was more courageous, more principled and more honorable than George Herbert Walker Bush,” he said.

Alan Simpson, a former Senator from Wyoming, also delivered a tribute in which he honored Bush for his humility, calling him the “most decent and honorable person I ever met.”

“Those who travel the high road of humility in Washington, D.C. are not bothered by heavy traffic,” he said. Simpson added that Bush “was a class act, from birth to death.”

The Irish tenor Ronan Tynan, who sang at Bush’s deathbed, performed “Last Full Measure of Devotion” and the “Lord’s Prayer.”

Following the service, the Bush family, including George W. Bush, his wife, Laura Bush, and other children and grandchildren of the 41st president, followed the casket out of the National Cathedral.

Funeral attendees included President Trump and his wife, First Lady Melania Trump, who arrived at the National Cathedral and sat in the same pew as former president Barack Obama, his wife Michelle Obama, former president Bill Clinton and Trump’s former political rival Hillary Clinton. The president shook hands with the Obamas, but did not greet the Clintons, who stared straight ahead during his arrival. Former president Jimmy Carter and his wife, Rosalynn Carter, sat at the end of the pew.

In the days following his death, Bush has been remembered for his public and military service, volunteerism and personal character. He was memorialized in Washington, D.C., in a service that marks the end of a national viewing period for the former president — one that drew hordes of citizens and lawmakers, not to mention Bush’s service dog, Sully. Bush will also lie in repose at St. Martin’s Episcopal Church in Houston before a service there Thursday.

Here’s what to know about Bush’s funeral services.

Who attended and spoke at George H.W. Bush’s funeral?

Where will Bush be buried?

Bush’s remains will be buried on the grounds of his presidential library at Texas A&M University, in College Station. He will be buried alongside his wife of 73 years, Barbara, who died earlier this year, as well as their late daughter Robin, who died of leukemia in 1953. The former President will reportedly be buried in his trademark colorful socks — specifically, a pair adorned with planes flying in formation, a nod to his military service.

How is the nation observing Bush’s funeral?

Trump has declared Wednesday a national day of mourning. The federal government and the stock market are closed, mail delivery has been paused and flags on public buildings will fly at half-staff for 30 days. Most banks and schools will remain open.

Write to Jamie Ducharme at jamie.ducharme@time.com and Mahita Gajanan at mahita.gajanan@time.com. 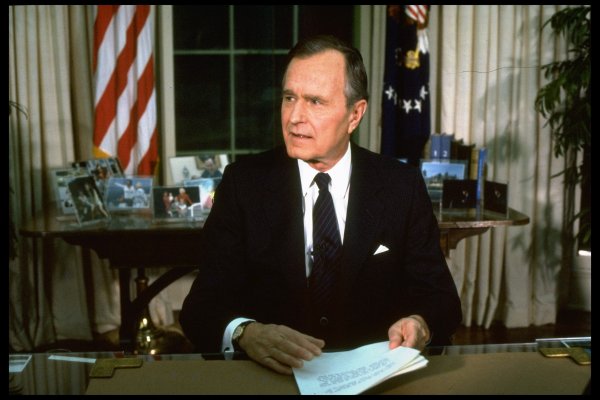 What H.W.'s Life Can Teach America About Overcoming Challenges
Next Up: Editor's Pick