A Criminal Justice Bill Has Broad Bipartisan Support. Why That's Not Enough

As Vice President Mike Pence made the case that the Republican-led Senate should pass a bipartisan and massive rewrite of the nation’s criminal justice code, Majority Leader Mitch McConnell sat politely but silently.

As the 115th Congress prepares to wrap up its work, the criminal justice proposal is among the remaining can-do bills left in limbo. The Republican-led House passed its version of the legislation with broad and bipartisan support. The final vote was 360 to 59.

Yet the plan is stalled in the Senate, where McConnell alone controls the agenda. That means anything McConnell wants to keep tucked in his pocket stays there, and there’s realistically nothing anyone can do to force his hand.

Other Republicans, huddled on Tuesday, Nov. 27, for the private luncheon, kept glancing at McConnell for clues about the fate of the First Step Act. They found none.

As the 115th Congress prepares to wrap up its work, the criminal justice proposal is among the remaining can-do bills left in limbo. The Republican-led House passed its version of the legislation with broad and bipartisan support. The final vote was 360 to 59. Yet it is stalled in the Senate, where McConnell alone controls the agenda. That means anything McConnell wants to keep tucked in his pocket stays there, and there’s realistically nothing anyone can do to force his hand.

The official lines from McConnell’s orbit are that time is finite, other measures are a higher priority, there’s always next year. The arguments are not incorrect. Vast pieces of the government do run out of cash on Dec. 7 if Congress can’t write — and President Donald Trump can’t sign — a spending bill. The Senate still hasn’t finished its part of the Farm Bill, which expired on Sept. 30. Federal judges, who will shape the country for a generation and whom McConnell sees as the cornerstone of his legacy, aren’t going to confirm themselves.

But supporters of the criminal justice package seethe with frustration. If the measure were brought to the floor, Republican Sen. Lindsey Graham of South Carolina predicts, it would secure 80 votes. Sen. Chuck Grassley of Iowa, the outgoing GOP chairman of the Senate Judiciary Committee, has told colleagues that he will rewrite sections if that’s what it takes, but has found few takers. And Trump brought lawmakers to the White House on Nov. 14 to tell them — and the country — that he backs the bill, which would be the biggest rewrite of the criminal code in a generation.

Trump has been lobbying McConnell on the measure. On Nov. 20, he phoned McConnell and told him to get in gear. On Nov. 26, he convened a roundtable on the bill while making a campaign swing through Mississippi. A day later, he sent Pence and Kushner to the Capitol to make the case for the sweeping bill.

The legislation would give judges more leeway when sentencing non-violent criminals, roll back mandatory minimums and scrap the disparity between crack and power cocaine that is widely recognized as racist. The provisions also largely forbid pregnant women from being shackled and most juveniles from being held in solitary confinement. The bill also speeds up release for those who earn “good-time credit” by participating in training and counseling programs while behind bars and includes anti-recidivism programs while convicts are still inmates.

While the legislation’s proposal only would apply to federal inmates, advocates from across the spectrum see the package as an enormous step forward. It has drawn a broad coalition of backers, from the libertarian-leaning network of groups backed by billionaire Charles Koch to the American Civil Liberties Union. Both are running ads to raise the profile of the issue, and the ACLU is calling out McConnell by name as a roadblock in their ads.

Which, of course, is of little concern to McConnell, who seldom bends to such pressure. Just ask Merrick Garland, President Barack Obama’s nominee to the Supreme Court; McConnell summarily refused to consider the pick and held the seat vacant until Trump offered his own nominee, Neil Gorsuch.

McConnell’s calculus — and it may prove correct — is that the GOP’s base will eventually find a reason to loathe the proposed reforms. Passing them now only sets in motion a possible threat when someone who received leniency under the new guidelines commits another crime. It could be Willie Horton 2.0, and McConnell has no interest in that.

McConnell’s poker face is in part coming from a desire to keep his internal politics from spilling into the open. On that, he has failed. Sens. Mike Lee of Utah and Tom Cotton of Arkansas clashed during that Pence lunch, and the pair has been sparring on Twitter, too. Critics of the measure like Cotton say it gives too many rights to criminals, too much power to judges (or, as skeptics call them, “bureaucrats”), doesn’t do enough for victims. The Department of Justice says some individuals convicted of some sex crimes would be eligible through a loophole for early release, a suggestion backers of the bill say is a dubious read of the language but an easy fix regardless. Either way, McConnell isn’t eager to rush to persuade his holdout colleagues to side with convicts.

At the same time, rejecting the measure now means its strongest supporters will try again in the 116th Congress, which begins in January. Democrats are set to claim the majority in the House, which could spell a more liberal bill than the one on the table now. Newly elected members of Congress may not yet have developed an appetite for the compromise approach of the current iteration and may demand a more robust set of changes, all but condemning the effort in the Senate. McConnell sees that as a way to tank the efforts without his thumb on the scale.

And looking ahead, the map does not favor McConnell’s party in 2020. Republicans will be defending 22 seats, while Democrats will be guarding 12. It may only help the GOP to look tough-on-crime in many of those states and reject a 2019 version of criminal justice legislation, especially if voters think it tilts too far to the left. In fact, such a move may help to keep Republicans in control of the Senate in 2021. And that would be just fine with McConnell. 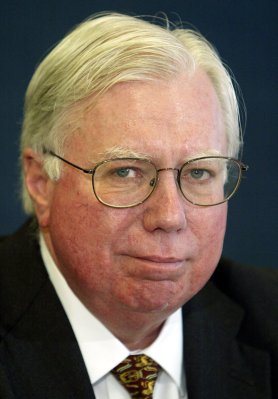 Who Is Jerome Corsi and Why Is He Caught Up in the Mueller Probe?
Next Up: Editor's Pick