Trump Saved 'Peas' and 'Carrots' at the Presidential Turkey Pardon

Both “Peas” and “Carrots” got away with their lives thanks to a pardon from President Donald Trump at the annual White House event.

Members of the public and media gathered in the Rose Garden for the tradition to see which lucky bird or birds would catch a break this year.

Turkeys are bred for consumption, so they don’t live particularly long. But both Peas and Carrot will be spared from a holiday feast fate.

This year, it was Peas who was bestowed with the official “National Thanksgiving Turkey” title.

“That turkey is so lucky. I’ve never seen such a beautiful turkey”,” Trump said as he marked the occasion on Tuesday, working in a joke about Carrots contesting the result. Peas won in an “a fair and open election,” Trump said, adding: “Unfortunately carrots refused to concede and demanded a recount.”

Both Peas and Carrots will “retire” to “Gobbler’s Rest” at Virginia Tech, joining Drumstick and Wishbone, who Trump pardoned in 2017. The turkeys’ time on the farm may not be entirely restful, Trump said. “I have warned them that House Democrats are likely to issue them both subpoenas” and he “can’t guarantee that your pardons won’t be enjoined by the Ninth Circuit.”

Just like last year, The White House opted to let people decide which turkey Trump pardons by putting it to an online poll on Monday. Unsurprisingly the contenders were neck and turkey neck.

Under Obama, it was “Tater” and “Tot” who received four star accommodations at The Intercontinental in 2016.

The consensus among most historians is that the first President to pardon a turkey was Kennedy. He did unofficially in 1963 with the words, “We’ll just let this one grow.” 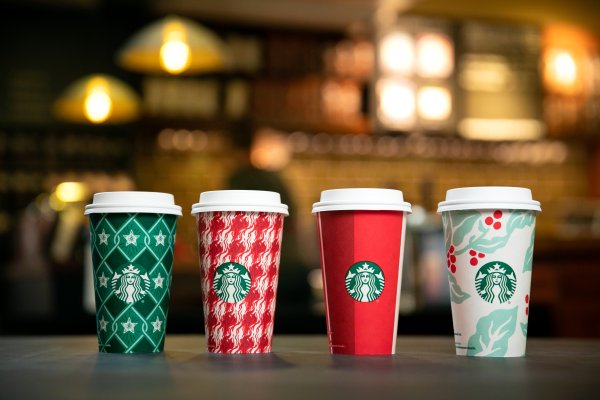 The Starbucks Holiday Cups Are Here, So Get Seasonal Immediately
Next Up: Editor's Pick