As Michelle was promoting new memoir Becoming, the former president decided to drop by her latest stop on Saturday at Washington, D.C.’s Capitol One Arena book event to show her support — bearing the gift of flowers, of course.

“This is like — you know when Jay-Z comes out during the Beyoncé concert?” Barack joked at the event, according to CNN. “Like, ‘Crazy in Love’? It’s the same thing. It’s just a little sample to enhance the concert.” (The Obamas are known fans of the Carter couple, too, so perhaps it’s no surprise that Barack would look to that superstar duo as an example. Obama even had Beyoncé perform at his inaugurations.)

He also reflected on the first time he met Michelle: “First of all, she’s really tall, and most of it was legs,” he joked, before getting serious: “The thing that I remember during that summer as we became friends, before she finally relented to a date, was she was one of a kind,” he said. “You know when you meet somebody and you feel like they get it?”

But it wasn’t just words; he brought with him a bouquet of pink roses, completing the picture of a supportive husband.

While on her press tour, Michelle has mentioned that now that Obama is out of office, the pair are “finding each other” again. In her book, she’s also opened up about their work to keep their marriage successful, including attending counseling. 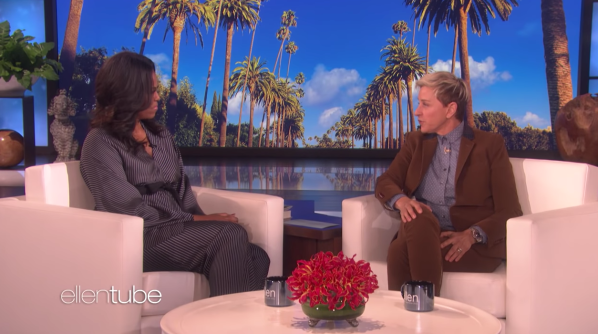 Michelle Obama Busts Out Her Barack Impression for Ellen
Next Up: Editor's Pick