An Artificial intelligence (AI) host is seen on the screen during 'Light of Internet' Expo of the 5th World Internet Conference in Wuzhen, China on Nov. 7, 2018.
Du Yang—China News Service/VCG/Getty Images
By Eli Meixler

The so-called “Artificial Intelligence Anchor” was developed by Xinhua in conjunction with Chinese search engine Sogou.com and is based on images of real, human news presenters, Xinhua reports.

The novel newsreader was introduced at the World Internet Conference in Wuzhen, China in artificial intelligence’s eerie foray into the television news industry.

“This is my very first day in Xinhua news agency,” the AI anchor said in the inaugural broadcast, noting that “the development of the media industry calls for continuous innovation and deep integration with the international advanced technologies.”

In a not-so human touch, “he” also promised “to work tirelessly to keep you informed as texts will be typed into my system uninterrupted.”

The AI system uses the base image of a real newscaster, with machine learning technology recreating realistic speech patterns and facial movements akin to human counterparts, the South China Morning Post reports. The effect is similar to that of a digital puppet, according to an analysis by tech news site The Verge. A synthesized voice emits news scripts from an almost-human visage.

Xinhua said the virtual anchor was already “a member of [the] reporting team” and boasted that its new hire is capable of working “24 hours a day…reducing news production costs and improving efficiency.” It will also be capable of “learning” from live broadcast videos, according to Xinhua.

The AI anchor isn’t the only instance of a virtual human making its way into the real world. Holographic projections of celebrities and musicians — some of them long-deceased — have also become increasingly common. 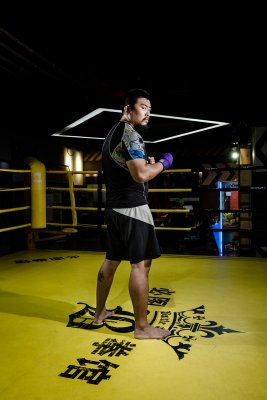 Meet the Chinese MMA Fighter Taking on the Grandmasters of Kung Fu
Next Up: Editor's Pick