How Singles Day Grew to Be the World's Biggest Shopping Event

Singles Day 2018, the biggest shopping event of the year is today: not Black Friday, but Singles’ Day, which arrives in China on Sunday with door-busting deals for savvy shoppers.

The holiday was inaugurated by Chinese e-commerce giant Alibaba in 2009, and has since gone to outpace Black Friday as the single largest sales day in the world. Last year, Singles’ Day hit a record $25.3 billion in sales, double Black Friday and Cyber Monday combined.

But its origins stretch back to 1993, when students at China’s Nanjing University bought presents to celebrate their single-hood and resist social pressure to get married. The single students chose Nov. 11 as their “anti-Valentine’s Day,” with each of the date’s lone digit (11.11) representing a “bare stick,” or uncoupled individual who rides solo.

These days, Singles’ Day is still about treating yourself, whether or not you have someone to share your new loot. It’s also gone global: Alibaba rebranded Singles’ Day as the “11.11 Global Shopping Festival,” and its e-commerce archrival JD.com joined the fray, as have international brands like Gap, Nike, and Macy’s. In 2016, Alibaba even started holding “See Now, Buy Now” fashion shows in late October, extending the Singles’ Day shopping spree with preorder deals.

Let’s unpack some Singles’ Day stats and see how the Chinese shopping sensation stacks up.

But they do have some differences. Singles’ Day features more limited-edition luxury items, with less emphasis on steep discounts.

Many U.S. shoppers look to Black Friday to indulge on a big purchase, like a flat-screen TV, at discount prices. But Singles’ Day, like original nemesis Valentine’s Day, has also become known for gift exchanges.

“What started as an occasion for single people to celebrate their independence has evolved into one of the biggest gifting occasions in China,” Fung Global Retail & Technology analysts reported in 2017.

Shoppers in 225 countries snapped up goods from over 140,000 businesses, according to data from Alibaba. At the height of sales, Alibaba’s cloud services processed 325,000 transactions per second; in total, it delivered 812 million packages.

There’s also a recent upstart: Prime Day, which Amazon debuted in July 2015 with special deals only for Amazon Prime customers.

Amazon doesn’t disclose sales figures, but the company said that Prime Day 2018 was its biggest ever, with 100 million products ordered despite early technical glitches. Amazon also extended Prime Day for 36-hours and offered credit to Whole Foods customers in response.

But Prime Day is still a mere minnow compared to Singles’ Day. Part of the reason is market size: Prime Day only caters to Amazon subscribers, whose number surpassed 100 million this year. Amazon also uses Prime Day to promote Prime membership and in-house products like Alexa and Echo speakers and Fire tablets.

Singles’ Day is about far more than the sales, with Alibaba and other brands vendors hosting a slew of festivals and special events to entice shoppers.

Alibaba kicks off Singles’ Day with a star-studded gala on Nov. 10 that rivals the Super Bowl for spectacle. The 2017 telecast was headlined by Pharrell Williams and included virtual reality shows, a free Antarctic excursion giveaway, and celebrity appearances by Nicole Kidman, Jesse J, and Maria Sharapova. 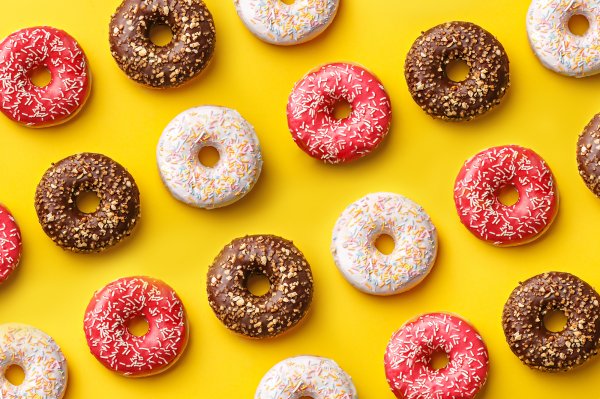 People Are Buying Out This Doughnut Shop for the Sweetest Reason
Next Up: Editor's Pick