Fox News’ intense coverage of the migrant caravan was the subject of this week’s “Saturday Night Live” cold open.

The show mocked what it saw as fear-mongering rhetoric used by conservative media. The sketch parodied an episode of “The Ingraham Angle,” with host Laura Ingraham played by ‘SNL’s Kate McKinnon, commenting on the thousands of migrants making their way through Mexico in the run-up to Tuesday’s midterm elections.

“Tonight we’re live from the Arizona border, where a vicious caravan of dozens, maybe millions of illegal immigrants is heading straight for you and your grandchildren,” McKinnon’s Ingraham said.

McKinnon also poked fun of conservatives’ attempts to defend President Trump’s aggressive tone with regard to the caravan.

“The liberal media is trying to label President Trump a racist,” said McKinnon’s Ingraham, “but except for his words and actions throughout his life, how is he racist?”

The caravan was represented as a group of frenzied shoppers on Black Friday, a horde of zombies from 2013’s “World War Z” and a mass of crabs scuttling along a beach.

Playing guest Judge Jeanine Pirro, Cecily Strong said the caravan was made up of “everyone you’ve ever seen in your nightmares.” 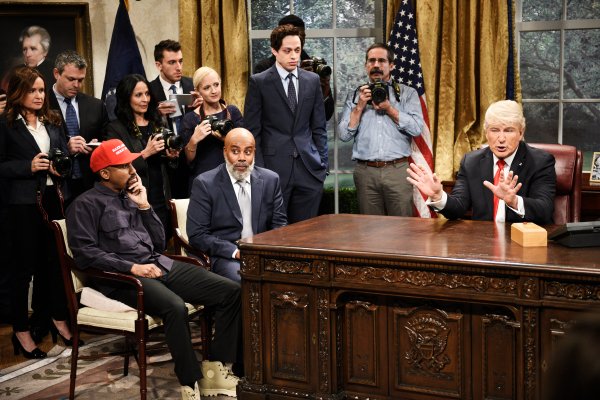 'SNL' Sends Up Meeting Between Kanye West and Donald Trump
Next Up: Editor's Pick