Government Leaks to the Press Are Crucial to Our Democracy. So Why Are We Suddenly Punishing Them So Harshly?

This 1985 file photo shows Samuel Loring Morison, after he was found guilty under Espionage Act of selling photos to Jane's Defense Weekly.
Marty Katz—The LIFE Images Collection/Getty
Ideas
By Gabe Rottman
Gabe Rottman is a First Amendment lawyer at the Reporters Committee for Freedom of the Press and directs its Technology and Press Freedom Project.

Until the turn of the millennium, only one person had been convicted under the World War I-era Espionage Act for disclosing government secrets to the press. President Clinton pardoned that man, Samuel Loring Morison, in 2001, precisely because his prosecution was so irregular. As Senator Daniel Patrick Moynihan said in support of the pardon, Morison was, then, the “only one convicted of an activity which has become a routine aspect of government life: leaking information to the press in order to bring pressure to bear on a policy question.”

Today, Senator Moynihan’s concern seems quaint. President Obama, in his eight years in office, prosecuted 11 government employees for “leaks.” President Trump, in his first 21 months, prosecuted five, and secured guilty pleas in three. In August, Reality Winner, the first Trump leak defendant, received the longest sentence ever in such a case: 63 months in prison. Just this past month saw a plea (James Wolfe), a sentencing (Terry Albury, who received the second longest sentence of 48 months), and a new prosecution (Natalie Edwards).

The normalization of what used to be extraordinary—treating a reporter’s source as a spy—raises a number of discomforting facts, of deepening relevance to the state of press freedom in America.

First, the explosion of Espionage Act leak cases over just the last decade is aberrational as a matter of history. Morison was the first such case in 1984 (there were four attempted prosecutions prior to Morison, including the Pentagon Papers case, but no convictions under the spying law). There was one more in 2005, when a Pentagon analyst and two lobbyists with the American Israel Public Affairs Committee were prosecuted for sharing information about Iran, though that case also fell apart and wasn’t really about the media anyway.

In 2009, however, the dam broke with an FBI linguist named Shamai Leibowitz, who was successfully prosecuted for sharing information with a blogger. In the following nine years, prosecutors brought 15 more cases, almost all of which have now resulted in convictions or pleas. So, not only did President Obama prosecute more leakers than all other presidents combined, but, with the exception of his immediate predecessor, President Trump has himself prosecuted more leakers than all other presidencies combined.

This uptick in leak prosecutions isn’t because there are more leaks. Quite the contrary: anecdotally, sources today are often less willing to talk, probably because of the crackdown. Official Washington has been leaking like a sieve since the founding of the country. To give just two examples, in the 19th century the Senate used to lock reporters in committee rooms until they disclosed their sources (with no success). And the history of the 1970s could not have been written without leaks, from Deep Throat to the Pentagon Papers.

Second, the punishments in these cases are becoming progressively more severe. Until Reality Winner’s five- and Albury’s four-year sentences, only three defendants had received a sentence of more than two years, and many received no prison time at all. President Obama commuted the most severe sentence—the 35 years handed down by a military court to Chelsea Manning—to time-served shortly before leaving office (citing its severity as a reason for mercy).

Third, selective enforcement—where top-level officials leak with impunity, but low-level employees go to jail for years—is an acute concern. CIA director David Petraeus, who shared code-word intelligence and the names of secret assets with his mistress, received probation. Marine General James Cartwright lied to investigators about leaking information about arguably the most consequential cyber-attack in history, and was pardoned.

Finally, fourth, we’re getting used to all of this. For much of American history, law enforcement recognized and internalized the sensitivity of investigating reporters and their sources. The Department of Justice, for instance, has guidelines that govern when and how it can investigate the media, which were strengthened to protect the press under Attorney General Holder after the Obama administration was criticized for its treatment of leaks. By contrast, Attorney General Jeff Sessions now trumpets the new “get tough on leaks” posture, even giving a prominent speech in August 2017 heralding a tripling of leaks cases.

All this, then, raises the question of why leak prosecutions are becoming so routine. It’s likely a mix of factors. Modern technology produces more digital breadcrumbs, which can be analyzed in more detail and with greater speed, and the government has broad legal authority to compel telecommunications or internet companies to hand them over. Further, “insider threat” programs that monitor access to classified information are now well established across government. And the more the courts approve of treating sources like spies, the more the Justice Department feels empowered to do so, exacerbating the problem.

This trend aren’t just a threat to the public’s right to know. Sources are drying up, sure, and the store of public knowledge about government affairs is shrinking. That’s bad. But the only thing really stopping law enforcement from prosecuting journalists for publishing secret government information, rather than their sources for providing it, are democratic norms and the fear that the public’s collective head will explode when it finds out (and maybe the Constitution, but that’s a thin reed). As these leak cases become workaday, that check of mass opprobrium becomes less meaningful.

While there’s a temptation to make too much of the president’s “enemy of the people” rhetoric about the press, there’s also a corresponding urge to make too little of it. While it might be theater, and while the president himself might not really mean it, it’s a historical fact that no other president has gone to this length to demonize the press. Couple that with a legal avenue to criminally target reporters for doing their jobs, and we’re sidling up to a line that, once crossed, puts the one occupation named and protected in the Constitution in a place of peril it has never been before. 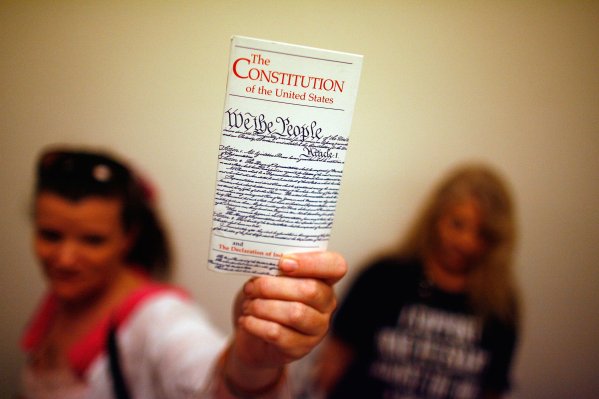 What the Constitution Really Says About Birthright Citizenship
Next Up: Editor's Pick