When President Donald Trump visits Pittsburgh Tuesday, he’ll be faced with the tough task of balancing the traditional presidential duty to comfort and unite the country following the deadly synagogue shooting with his instinct to rip into his political foes and the press.

The White House struggled to strike that balance Monday. White House Press Secretary Sarah Sanders opened her first press briefing in 26 days with a tearful statement about the shooting, but ended the briefing with a diatribe against what the White House views as unfair coverage by the press.

Sanders choked up as she said that Trump and first lady Melania Trump will travel to Pittsburgh on Tuesday in the wake of “a chilling act of mass murder” and an “act of hatred” that left 11 people dead in the Tree of Life synagogue. Sanders added that anti-Semitism is a “plague to humanity” and something that all Americans “have a duty to confront.”

But it didn’t take long before Sanders was criticizing the press for highlighting Trump’s harsh rhetoric on the campaign trail in the run up to the midterm elections. After the shooting, “the very first thing that the president did was condemn the attacks,” Sanders said. “The very first thing the media did was blame the president,” she said. The media, she said, has “a huge responsibility to play in the divisive nature of the country.”

The press hasn’t done enough to highlight the impact of Trump’s policies on the booming economy and low unemployment, among other things, Sanders said. Asked if a national tragedy takes precedence over Trump’s need to punch back against opponents, Sanders said Trump had repeatedly “risen to that occasion and worked to bring our country together” after the deadly Las Vegas shooting that killed 58 people in October 2017, hurricanes and the tragedy in Pittsburgh.

On Twitter Monday, Trump blamed the news media for “division and hatred” in the country and called the press “the true Enemy of the People.”

It was not the first time Trump has struggled to balance his political fighting instincts.

Following deadly clashes last year between neo-Nazis and counter protestors in Charlottesville, Virginia, critics blamed Trump for increasing racial tensions when he said there was “blame on both sides.” 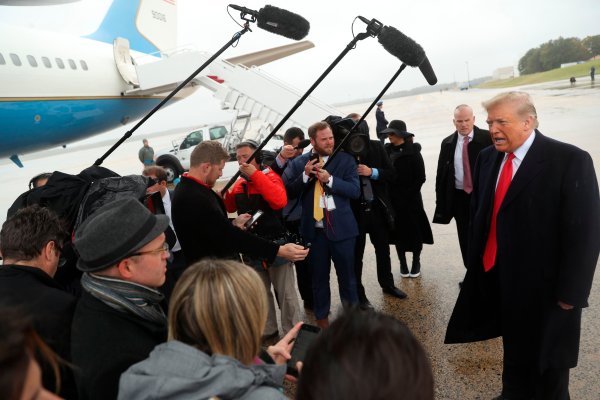 Trump: Pittsburgh Synagogue Should Have Had Armed Guard
Next Up: Editor's Pick