Community, Religious Leaders Say Pittsburgh Synagogue Shooting 'Will Not Break Us' At Vigil

Religious leaders across faiths, elected officials and community members filled a memorial hall late Sunday to honor the victims of a mass shooting a Pittsburgh synagogue one day prior.

Through speeches, hymns and prayer, the thousands who gathered at the Soldiers & Sailors Memorial Hall sat to remember those who died in the tragedy. Eleven people were killed and six others were injured when a suspected gunman, identified as Robert Bowers of Baldwin, Penn., opened fire in the Tree of Life synagogue Saturday morning. Bowers has been taken into custody and charged with 29 counts related to federal hate crime laws, including 11 counts of obstruction of religious beliefs resulting in death.

Outside the memorial hall, hundreds of attendees who couldn’t fit into the auditorium gathered in the rain to listen to the event on speakers while inside, community leaders vowed to remain strong in wake of the massacre. Rabbis from the three affected Tree of Life congregations spoke during the event — Rabbi Jonathan Perlman, Rabbi Jeffrey Myers and Rabbi Cheryl Klein.

Perlman, who leads the New Light congregation, commended the people of his congregation for their volunteerism and efforts in the local community.

“What happened yesterday will not break us,” he said, holding back tears. “It will not ruin us. We will continue to thrive and sing and worship and learn together and continue our historic legacy in this city with the friendliest people that we know.”

Myers, who was leading services at Tree of Life minutes before the shooter entered, said there were 12 people in his sanctuary when the mass murder started.

“I helped pull out the people that I could from the front,” he said. “But alas I had eight people in the back. One fortunately survived. Seven of my congregants were shot dead in my sanctuary. My holy place has been defiled. We will rebuild.”

Klein, who leads Congregation Dor Hadash, said the shooting left her “numb.” The only reason she hadn’t been at Tree of Life during the shooting was because she was out of town celebrating Shabbat with her family, she said.

Klein honored Jerry Rabinowitz, who was killed in the shooting. She said Rabinowitz died while trying to tend to the wounded, calling him a “voice of reason.”

“Jerry defined what it is to be a mensch,” she said.

Pittsburgh Mayor Bill Peduto also spoke at the vigil to say the city will go to lengths to “eradicate any type of hate.”

“We will drive anti-semitism and the hate of any people back to the basement, on their computer and away from the open discussions and dialogues around this city, around the state and around the country,” he said.

The efforts on part of other faith groups in Pittsburgh were highlighted during the event. Wasi Mohamed, executive director of the Islamic Center for Pittsburgh, received a standing ovation after announcing that the Muslim community raised more than $70,000 in an online campaign on behalf of the Jewish community to help families affected in the shooting.

“We realize that it’s such a tragic time. These are our family — money should not be an issue. That should not be a concern. Paying for a funeral or paying for medical costs, that is not what should be focused on. It’s about mourning right now,” Mohamed said. “We’re not going to stop. We just want to know what you need.

Community leaders took time during the vigil to emphasize the need to be together in the wake of the massacre.

“After a raging anti-Semite shot up a holy place of worship on our Shabbat and murdered our extended Pittsburgh Jewish family, we needed to be here because in times like these we need community,” said Jeff Finkelstein, CEO of Jewish Federation of Greater Pittsburgh. “We need the comfort of each other. We need love, not hate. And we need that giant hug that this Pittsburgh Jewish community always gives.” 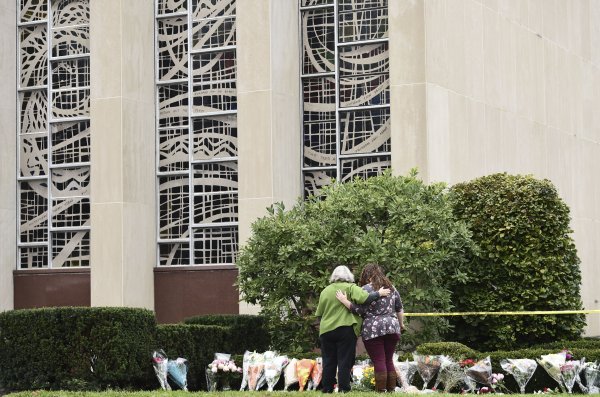