Prince Harry and Meghan Markle Are Honoring a Fijian War Hero. Here's What to Know About Him

Prince Harry and Meghan Markle are well on their way through their 16-day whirlwind tour of the Pacific. After a three-day stop on the island of Fiji, the expectant parents made their move to the neighboring island of Tonga on Thursday. But before they did, the Duke and Duchess of Sussex unveiled a statue of a Fijian solider named Talaiasi Labalaba, who was a war hero to his peers but whose name is likely unknown to most royals-watchers.

The former British colony of Fiji became independent in 1970, but remains part of the Commonwealth. Countless soldiers in commonwealth countries such as Australia, New Zealand and Tonga — which are the other stops on the Royal tour — gave their lives in battle on behalf of the Crown. But these troops hailed from lands far from the halls of power, and were often people of color; veterans of those forces have often received little recognition for their efforts in combat.

The statue of Labalaba was unveiled in Nadi, a town on Fiji’s main island of Viti Levu, as a testament to those efforts. Here’s what you should know about Labalaba’s act of bravery.

Who was Talaiasi Labalaba?

Labalaba, known as “Laba” by his peers, was a Fijian sergeant in the Special Air Services (SAS), a special forces unit of the British Army tasked with largely covert operations.

Born in Fiji in 1942, he was killed in action during the Battle of Mirbat in 1972, when he was just 30 years old. Laba was known by his peers as a “gentle giant,” according to the BBC. He was one of only eight Fijians to join the elite SAS, and was known among them as exceptional for his character and loyalty.

What was the Battle of Mirbat?

The Battle of Mirbat was a Cold War proxy conflict fought between clandestine British forces and pro-communist guerrillas in Oman. At 6 a.m. on July 19, 1972, hundreds of guerrillas ambushed a compound where SAS forces were stationed just outside the Port of Mirbat. Though the British regiment had been slated to depart later that day, they suddenly found themselves fighting for their lives, assisted by only a few local fighters.

The nine-member regiment, of which Laba was a part, was stationed for a year in Mirbat on a mission code-named Operation Jaguar, tasked with protecting the Sultan of Oman from falling to communist rebels known as the Popular Front for the Liberation of the Occupied Arabian Gulf. The British were not openly involved in the conflict in Oman, but a lot was at stake in the strategically important Gulf state. Along with the Saudis, the Shah of Iran, India and Pakistan, the Crown was committed to preventing the Sultanate from coming under the influence of the Soviet Union.

Laba’s colleagues might not have survived without his heroism during this key battle, when he continued to fight despite severe injuries that ultimately claimed his life.

Why is Labalaba significant?

Sgt. Labalaba is best known for single-handedly manning a 25-lb. gun for several hours, even though the weapon usually required four to six men to operate. His jaw had been shot off, and he was killed when a bullet shot through his neck, according to the BBC. The SAS was ill-equipped and had slim chances of winning against so many unexpected foes. Despite the incredible odds, Labalala’s actions held off the rebels long enough for reinforcements to arrive and drive back them back, saving the lives of many of his comrades.

His bravery won him a posthumous Mention in Despatches, a high honor in the U.K. and throughout the Commonwealth, though his comrades have campaigned for him to be awarded the highest British military accolade: the Victoria Cross. Labalaba is buried in St. Martin’s Church in Hereford, England. 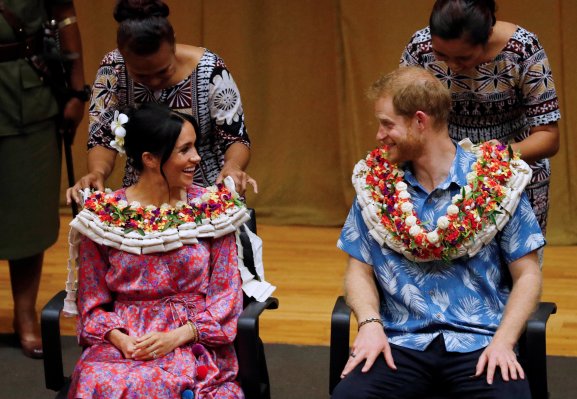 Meghan Markle Has Given Her First Royal Tour Speech
Next Up: Editor's Pick