As is tradition, President Donald Trump and First Lady Melania Trump hosted a Halloween event at a pumpkin-decorated White House on Sunday, bringing in local children and special guests for some trick-or-treating and games in the spirit of the October holiday. Handing out Twizzlers and Hershey chocolate bars, the Trumps — not in costume — greeted and snapped photos with kids dressed up as superheroes, astronauts and mythical creatures, all while the U.S. Air Force band serenaded the crowd.

Last year, during their first time around hosting the Halloween festivities, the Trumps handed out candy including Presidential M&Ms and cookies from the White House Pastry Kitchen and hung out with kids dressed up as everything from skeletons to dinosaurs. The facade of the White House was decked out in faux spider webs to create a spooky atmosphere, with pumpkins carved with the likenesses of past presidents scattered around, and some staff and other guests dressed up in costume. Presidents have been partaking in Halloween events for decades, with traditions harking back to the Eisenhower administration. While it seemed to start as an evening for presidential children to have their friends over for pumpkin carving and dress-up, it has evolved into an event open to local schoolchildren and military families, with hundreds of guests arriving.

The Trumps have also followed other presidential holiday traditions, like hosting the annual Easter Egg party and decorating the place for Christmas, during their time at the White House so far. 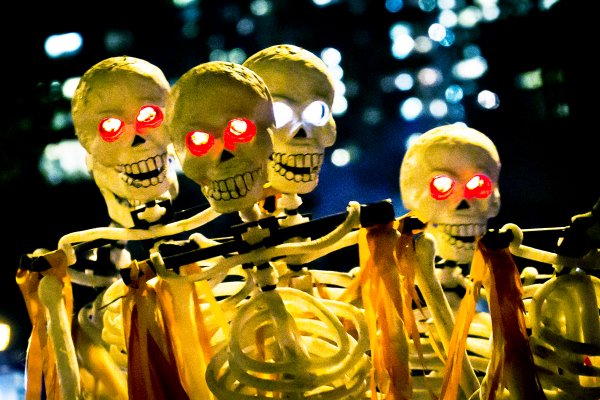 These People Went to Extreme Levels to Creep Everyone Out with Their Halloween Decorations
Next Up: Editor's Pick