The Beards, the Pitchers and a Rivalry Reborn. Here’s Your Guide to the Red Sox-Dodgers 2018 World Series

After a rain storm moved through the area, Red Sox Game Two scheduled starting pitcher David Price walked on the wet dirt, while in the background, the grounds crew, who had removed the tarp to clear it of standing water, were ready to put it back on over the infield. The Boston Red Sox hosted the Los Angeles Dodgers in Game One of the World Series at Fenway Park in Boston on Oct. 23, 2018.
Boston Globe—Boston Globe via Getty Images
By Sean Gregory

Let’s face it: the 2018 World Series, between the Los Angeles Dodgers and Boston Red Sox, doesn’t exactly ooze charm. This matchup of coastal metropoles features the team with the highest team payroll in the league — Boston, at around $228 million — against a club clocking in at number three — the Dodgers, who shelled out nearly $200 million to win the National League pennant. Boston’s been awash in championships, and another one will spark millions of eye rolls outside of New England. Ever since the Curse of the Bambino ended when Boston won the World Series in 2004, the Sox have won two more titles, in 2007 and 2013. Over the past decade, each of Boston’s four major pro sports franchises has lifted at least one championship trophy.

Sure, the Dodgers haven’t won a World Series in 30 years. But Los Angeles is, well, Los Angeles. No one’s darling.

Still, this could be a terrific series. So stop obsessing over your fantasy football team or LeBron on the Lakers or the midterm elections or whatever you’re obsessing about, and enjoy the Fall Classic.

Battle of the Beards. Each team has a talented player with bushy red stubble covering their faces. You can always pick a favorite and go from there. In Game 2 of the National League Championship Series, Los Angeles was six outs away from falling behind 0-2 to Milwaukee before Justin Turner hit a two-run home run that gave the Dodgers a 4-3 lead. Los Angeles won the game, and the series in seven. Turner’s do has inspired Halloween costumes, and this year he was nominated for MLB’s Roberto Clemente Award thanks to his off-the-field philanthropy. Boston’s bearded closer Craig Kimbrel hunches over and dangles his right arm like a bat’s wing before every pitch. He’s also struggled for much of this post-season, giving up runs in four straight playoff games before he quieted the Houston Astros in Game 5 of the American League Championship Series and closed out that series. According to former Red Sox reliever Eric Gagne, Kimbrel had been tipping his pitches: he texted this info to Boston manager Alex Cora, who passed it along to Kimbrel before his effective outing. As a player, Gagne enjoyed his best years in Los Angeles. After sharing info that could have given the Dodgers and advantage, no one’s buying Gagne any Dodger Dogs.

About That Drought. If any team’s due for a World Series title, it’s Los Angeles. Although the Dodgers haven’t won a championship in three decades, LA’s reached the playoffs a dozen times since ’88, and won the National League West six years running, falling just a game short against the Houston Astros in last year’s World Series. You’ll be sure to see many 30th anniversary replays of Kirk Gibson’s legendary home run in the bottom of the ninth of Game 1 of the 1988 World Series, when the injured slugger gave LA a walk-off win against the heavily favored Oakland A’s. (The Dodgers won the Series in five games). Poor Dennis Eckersley. The former Oakland reliever made the Hall of Fame, but at this point may be better known for giving up that homer to Gibson. Eckersley’s now a broadcaster… for the Red Sox.

Price Is (Finally) Right? Both teams have top-shelf starting pitchers that can keep the games tight. For Los Angeles, Clayton Kershaw’s likely headed to the Hall of Fame: he won Game 5 of the NLCS against Milwaukee then closed out Game 7 — and the NL pennant — with a quick inning of work. He’ll face Boston ace Chris Sale in tonight’s Game 1. But it’s the performance of another starter that’s giving Boston hope. David Price has struggled in the postseason; against Houston in Game 5 of the ALCS, however, Price pitched six shutout innings, and struck out nine Astros, leading Boston to a series-clinching victory. Price will start Game 2 against of the World Series, on Wednesday night.

Manny Being Manny. The Dodgers won the trade deadline this summer, when LA acquired Baltimore shortstop Manny Machado — one of the transcendent talents in the game — for five prospects. Look for Boston’s fans, never a reticent lot, to boo him hard. You see, a season ago Machado drove his spikes into the knee of Boston’s Dustin Pedroia on a slide. Boston retaliated by throwing at Machado, and Machado hurled about 100 F’bombs at the Red Sox. In the ALCS, Milwaukee’s Christian Yelich called Machado a “dirty player” due to some of his baserunning habits (like appearing to kick people). Machado will sign a monster contract somewhere after this season. But LA’s trade deadline bet has paid off: the Dodgers, with Machado in tow, are back in the Fall Classic.

Rivalry Reborn? Fans might not remember the prior Fall Classic between these two franchises, in 1916 : the Red Sox faced the Brooklyn Robins, who became the Brooklyn Dodgers in 1932, who became the Los Angeles Dodgers in 1958. The Sox beat the Robins in five. Boston and LA forged a legendary basketball rivalry, as the Celtics have met the Los Angeles Lakers 11 times in the NBA Finals, with the Celtics winning eight of those meetings (Boston also defeated the Minneapolis Lakers in the 1959 Finals). Boston’s fans hated LA so much, they implored the Philadelphia 76ers to “Beat LA! Beat LA!” as Philly knocked the Celtics out of the 1982 playoffs. (The Lakers beat the Sixers in the Finals that year). Like it or not, both baseball teams have the money and talent to make return trips to the World Series. If Boston-LA is a budding baseball rivalry, let’s just hope for a stellar first act. 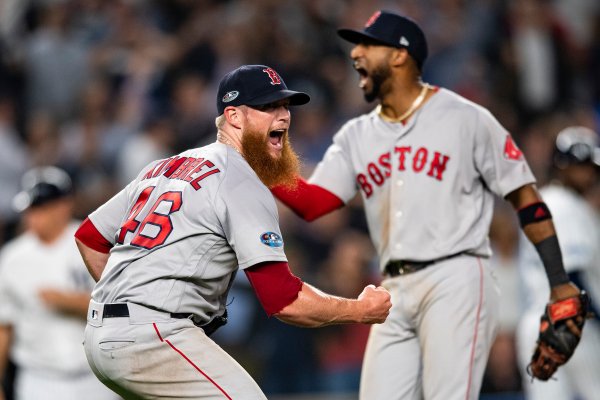