It may be Princess Eugenie’s big day, but Cara Delevingne nearly stole the show.

Delevingne rocked up to Princess Eugenie’s wedding to Jack Brooksbank wearing an outfit sure to go down in the record books for most memorable royal wedding fashion. She showed up at St. George’s chapel at Windsor Castle (if that sounds familiar, it’s because it is where Meghan Markle and Prince Harry were wed earlier this year) wearing a sleek, form-fitting tuxedo paired with a stylish top hat, sky-high black suede heels, and, oddly, a toothpick daintily perched on her lip. As author Caitlin Moran wrote on Twitter, the cropped morning coat, cummerbund, crisp white blouse, tailored trousers, and shrunken tie made the model and actress look like a “sexy Artful Dodger.”

It’s unclear if any other woman has made a similar sartorial choice in the past and dared to wear a suit to a royal wedding, but based on the reaction to Delevingne’s ensemble, expect to see a lot more women in tuxedos when summer wedding season hits. 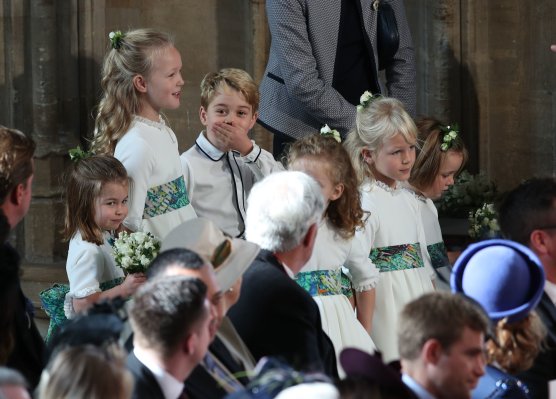 Prince George and Princess Charlotte Had an Absolute Ball at the Latest Royal Wedding
Next Up: Editor's Pick