Kid Rock and Kanye West Have Both Mused About Running for Office. Now They're at the White House

Is Donald Trump looking for a White House apprentice?

Kid Rock and Kanye West, two of Trump’s most high-profile musician supporters, visited the White House on Thursday for the signing of the Music Modernization Act, which aims to update industry copyright law for the streaming era.

West was already scheduled to meet with both Trump and White House senior adviser Jared Kushner on Thursday to discuss, among other topics, prison reform and the resurgence of manufacturing in America, White House Press Secretary Sarah Huckabee Sanders told reporters earlier this week.

The news then broke that Rock, who publicly supported Trump in the 2016 election, would join the president and West at the singing ceremony to witness the music legislation become law.

Both Rock and West have flirted with the idea of running for office. But while Rock ultimately admitted that his Republican Senate bid in Michigan was a promotional stunt for his 2017 album Sweet Southern Sugar, West seems to still be intent on running for president — just perhaps at a later date.

The Ye rapper said in September that he’s pushing back his planned presidential bid until the 2024 election. He previously stated at the 2015 MTV Video Music Awards that he wanted to run in the 2020 election.

“If I decide to do it, it will be done. I’m not gonna try,” West said during an interview on Power 92 Chicago. 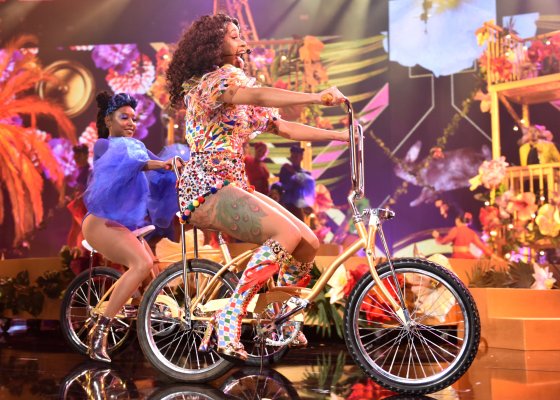 Stunned Man Reacting to Cardi B Performance at AMAs Is a Very Useful Meme
Next Up: Editor's Pick