All the Michael Myers Halloween Movies Ranked From Worst to Best

Warning: This post contains spoilers for the Halloween movie franchise.

This month marks the release of the new Halloween, directed by David Gordon Green and starring Jamie Lee Curtis as iconic final girl Laurie Strode, and by many indications, it’s going to be pretty good. The same cannot be said for all of the other 10 movies in the franchise, which run the gamut from excellent to extremely missable.

Here, a ranking of all the Michael Myers Halloween movies from the franchise, from worst to best.

In theory this movie has a lot of things going for it—Tyra Banks, Busta Rhymes, and a semi-interesting reality show premise—but in practice, it’s just lackluster, which is why it earned this last spot on the Michael Myers Halloween movie ranking. Though other Halloween sequels definitely overdid the “Michael’s here for his last living relative” thing, watching a bunch of annoying strangers try to outrun him is even less compelling.

Donald L. Shanks as Michael Myers in "Halloween 5: The Revenge of Michael"
Magnum/Shutterstock

Halloween 4 ends with Michael’s niece Jamie attacking her foster mother, but Halloween 5 ruins that potentially scary twist by establishing an unexplained psychic connection between Michael and Jamie that implies he was possessing her. It’s like Harry Potter’s lightning bolt scar, but with more screaming. It never really works, and neither does the introduction of a secondary villain, the Man in Black.

Rob Zombie spends the first hour of his remake trying to explain why Michael is the way he is, which is both unnecessary and unsuccessful. Plenty of people have dark childhoods and don’t grow up to be serial killers, Rob! This Halloween is also two hours long, which is an absolutely insane length for a horror movie, and is significantly more violent than the ’80s and ’90s ones. Scary movies should be scary, yes, but the heightened gore here doesn’t quite fit in a franchise that is otherwise relatively campy.

Like many beloved franchises before and after it, The Halloween sequels have a real knack for undercutting everything cool about the original; this one sets out to ruin the mystery of why Michael never dies. “He just doesn’t” had been working for nearly 20 years, but The Curse of Michael Myers makes it into a whole misguided thing involving witchcraft, runes, and human sacrifice. At least there’s a young Paul Rudd as adult Tommy Doyle, who, as you might imagine, is still struggling with post-traumatic “my babysitter almost got murdered in front of my face” disorder.

When the Michael-less Halloween III failed to impress anyone, the writers brought him back for Halloween 4 and introduced Jamie, the daughter of Laurie Strode (who has died in a car accident) and the niece of Michael Myers. There’s an excellent, super-dark twist at the end, but it’s hard to get past the feeling of wanting Michael to pick on someone his own size.

The first Halloween sequel is one of the better entries in the franchise, but it nonetheless suffers from a serious case of not needing to exist. The original Halloween has a perfect ending—Michael strolls away from Tommy Doyle’s house unharmed, to wreak unknowable future havoc—but Halloween II posits that he just…walked over to the hospital and came after Laurie again. Like, an hour later. Still, Donald Pleasence is in fine scenery-chewing form here, and there’s a chillingly gruesome murder in the hospital’s physical therapy pool.

A scene from "Halloween III - Season Of The Witch".
Universal/Kobal/Shutterstock

Halloween III is the Tokyo Drift of this franchise—it has almost nothing to do with the overarching storyline, but is actually kind of fun once you get past the fact that you’re dealing with a whole new, mostly irrelevant set of characters. In Season of the Witch, the original Halloween exists as a piece of fiction (you see it playing on TVs throughout the movie) and the villain is a toy company called Silver Shamrock, which plans to murder the entire U.S. population using microchips implanted in their wildly popular Halloween masks. But that’s not even the best part—that would of course be the fact that the murder energy is coming from a piece of Stonehenge that Silver Shamrock somehow imported to Northern California. The ’80s were wild!

The first Rob Zombie Halloween is, as established, a miss, but the second one is close to perfect. It’s full of great callbacks to the originals, and in some instances even improves upon weirder plot notes that never quite came together in earlier sequels. It’s also genuinely terrifying in a way that most of the Halloween movies are not—the last five minutes are downright haunting.

H20 isn’t anywhere near as scary as the original Halloween, but it’s thrilling to see Jamie Lee Curtis back as Laurie Strode, and the introduction of a new setting—northern California, where Laurie is living under an assumed name—adds a much-needed jolt of freshness. It’s also just so perfectly ’90s that’s it hard not to love it: Josh Hartnett and a Dawson’s Creek–era Michelle Williams star as high schoolers, and LL Cool J plays a security guard who spends his downtime writing erotica. Perfection!

The original Halloween is a masterpiece, full stop. None of the sequels have ever come close to replicating that feeling of dread, and few horror movies in general have done as much with so little—a man standing behind a shrub, a car creeping down a suburban street on a cloudy day. If John Carpenter’s score in the opening credits doesn’t forever ruin your ability to look at a jack-o’-lantern without feeling a little bit scared, then congratulations! You are Michael Myers. 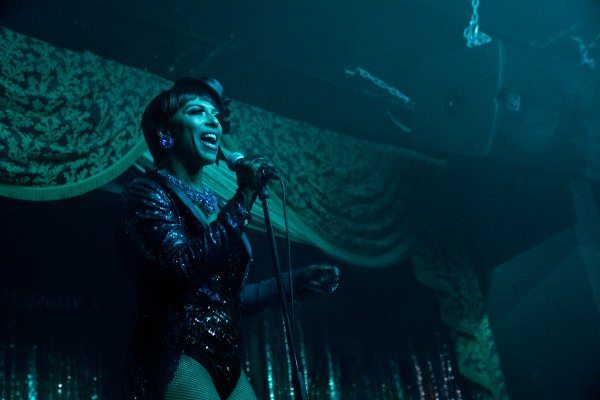 A Star Is Born's Shangela on Working With Lady Gaga and Taking Drag to Antarctica
Next Up: Editor's Pick