Vladimir Putin's Charm Offensive Kicks Off Another Year With 2019 Calendar

The 2019 Putin VVP calendar, so-named for Russian President Vladimir Putin’s initials, has hit the stands. This year’s take on the annual diary revives portrayals of the Russian president as a consummate diplomat and outdoorsman, suggesting that Putin, 65, is a president for all seasons.

The calendar kicks off January with an image of a bare-chested Putin dipping into the icy waters of Lake Seliger to observe the Russian Orthodox Epiphany, according to the Guardian. Putin’s image as an avid sportsman is also on display throughout the year, with photos of him wielding a shooting range pistol, playing hockey, horseback riding and cycling along a wooded road.

Subsequent months aim at showcasing the president’s softer side, with Putin holding a Bulgarian shepherd dog in one shot, and cuddling a leopard cub in another.

Russian state propaganda has carefully nurtured an image of Putin as an accomplished athlete and a paragon of masculinity. Images of Putin’s adventure holidays in the country’s remote regions frequently circulate in Russian media, many of them boasting a shirtless Putin engaging in outdoor sports like fishing and hunting.

The 2019 calendar is the latest edition in what has become a popular annual series: copies of a 2016 calendar published by a Russian tabloid newspaper sold out in Moscow, according to CNN. 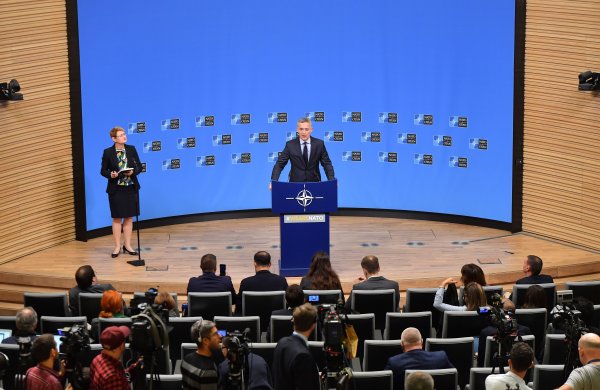 U.S. Warns It Could 'Take Out' New Russian Missiles
Next Up: Editor's Pick